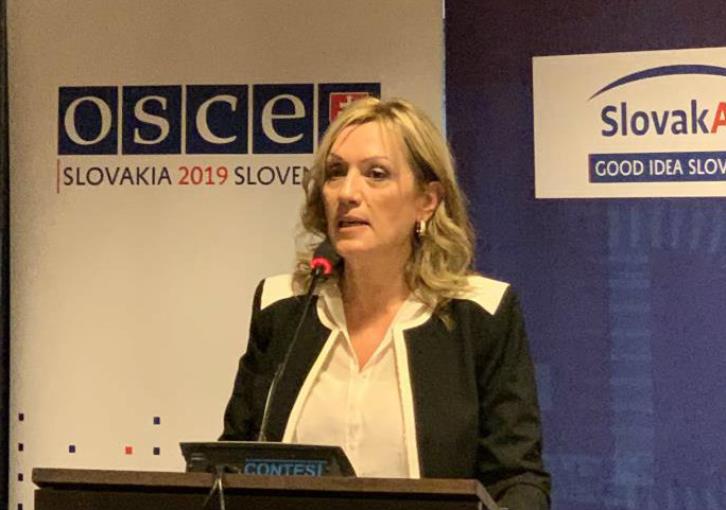 Opened by Professor Paola Severino, Special Representative of the OSCE Chairperson-in-Office on Combating Corruption, the seminar featured delegates and experts to discuss the development of legal frameworks to increase corporate transparency and promote economic security.

Charalambides spoke about the challenges of fighting corruption, which she likened to the mythological Greek monster Lernean Hydra. “Everytime you cut one head off, two new heads would regrow,” she said. “In order to fight corruption there must be political will and that is not always the case.”

Charalambides noted that in order to combat corruption it is necessary to work together and co-ordinate efforts.

She highlighted Slovakia’s Anti Letterbox Legislation as a good practice that effectively addresses corrupt activities of shell companies. “We should work towards passing this important legislation within our parliaments,” Charalambides said.

While in Bratislava, Charalambides held a bilateral meeting with Severino in order to build synergy between the Parliamentary Assembly and the governmental side of the OSCE. She also discussed pursuing co-operative efforts with other participants at the seminar, including from both the public and private sectors.

Charalambides was appointed Special Representative on Fighting Corruption in July 2019. For more on her work, please visit her web page.

By In Cyprus
Previous article
Cyprus, Israel to promote joint tourism packages in US, Russia and Germany
Next article
Cyprus has 2nd highest share of residence permits in EU