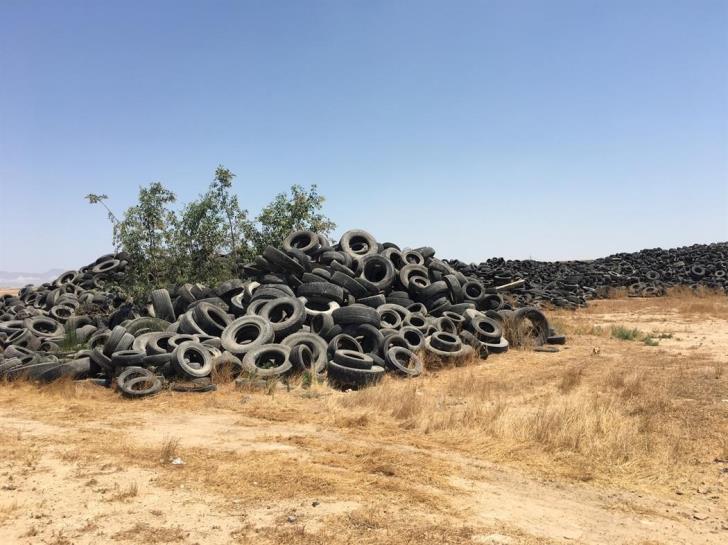 Efforts to relocate piles of used tyres from Dali’s industrial area have stumbled on government bureaucracy posing a hazard to nearby communities at risk of  toxic fumes in the event of a fire.

The company which rents out the premises where many of the used tyres are stored has written to President Nicos Anastasiades asking for his intervention so that the problem can be resolved “before there are fatal consequences for the lives of thousands of citizens”.

As stated in the letter, in 2014,  N & T Xynisteris Ktimatiki Ltd filed a lawsuit and recently managed to secure a court order against a tyre company, ordering it to vacate the two buildings within 15 days.

When it failed to do so, a warrant was issued for the premises to be vacated: however, when the court bailiff asked at the Department of the Environment for instructions on where to move the tyres, an Environmental Protection Officer threatened to report him for environmental contamination if he were to order the removal of the tyres from their current location.

A meeting of all involved was convened but no storage place was indicated. A transport cost issue arose as well. A new meeting followed with the head of the Department of the Environment stating that the problem lay in the fact that town planning permits have not been issued for the new storage area. As pointed out in the letter, when the company’s officers asked the reason why no settlement had been made for five years, there was no clear answer.

According to the Environment Department they are still waiting for the town planning permission before they move the tyres elsewhere. It is worth noting that two meetings on the issue have been held at the Presidential Palace but no decisions have been taken.

Dali mayor Leontios Kalllenos urged authorities to speed up procedures so that the tyres can be moved to a safe place. And he warned that in the event of a fire, the environmental consequences will be huge.