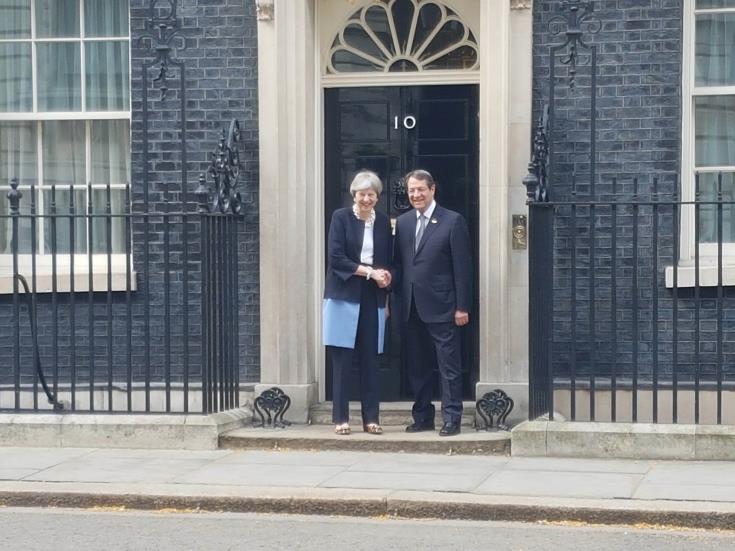 UK Prime Minister Theresa May emphasised her government’s “strong support” for a comprehensive settlement in the Cyprus issue during the meeting she held on Tuesday with President Anastasiades.  Moreover, May said the UK stands ready to play its part.

According to a Downing Street spokesperson, the Prime Minister also thanked President Anastasiades for Cyprus’ backing in the European Council for the strong statement on the recent Salisbury attacks and for their ongoing support as the UK works with its allies to reinforce our collective security.

The two leaders agreed on the need to maintain the close relationship on defence and security and the Prime Minister said she looked forward to strengthening this through greater co-operation across a range of activities, including military training and search and rescue.

The Prime Minister thanked President Anastasiades for Cyprus’ engagement in the Brexit talks so far and said she was keen to maintain and enhance the strong relationship between the two countries as the UK leaves the European Union.

They agreed on the importance of reaching an agreement on the legal framework for the British Sovereign Base Areas following the UK`s exit from the European Union to avoid any negative impact on Cypriots living and working on the bases.

By In Cyprus
Previous article
Main 14 – Stavros tis Psokas – Panagia – Pafos (Paphos) Cycling Route
Next article
No announcement yet on appointment of a UNSG’s personal envoy on Cyprus, UN say