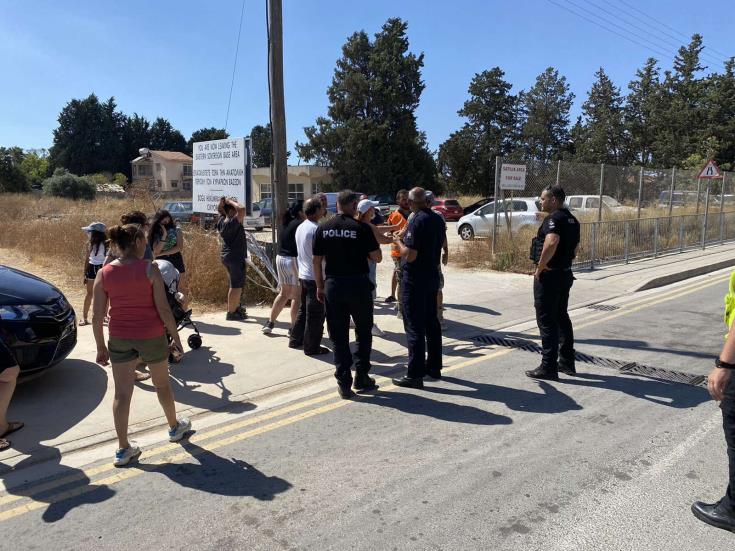 The British Bases advise people who use the Pergamos crossing point, in order to cross into the Turkish-occupied areas of Cyprus, to present a negative Covid-19 test certificate before returning to the free areas of the Republic.

Turkish Cypriot residents of Pyla protested on Wednesday at the Pergamos crossing, in the British Bases, asking that children under 12 years old are not obliged to present the test certificate before crossing.

As CNA learns, the protest took place after the Police of the British Bases did not permit a 12 year old child to cross with his family to the Turkish-occupied areas through Pergamos, due to lack of a certificate.

This prompted a group of Turkish Cypriot residents of Pyla, mostly women and children, to drive to the crossing point and block the road infront of the checkpoint at the British Bases, not allowing anyone to pass through.

The “authorities” of the illegal regime in the Turkish-occupied part of Cyprus, who sent crews to conduct coronavirus tests, informed Turkish Cypriot residents of Pyla that children under 12 years were not required to be subjected to the test, despite the fact that they were informed by the British Bases that no person would cross without the test.

Later on Wednesday afternoon, the group of Turkish Cypriots returned to Pyla without being able to persuade the British Bases to let them cross.

A British Bases spokesperson told the Cyprus News Agency that “we are aware of the situation and are advising anyone wishing to use the Pergamos crossing point to travel into the North, they will need to present a negative covid-19 test certificate before returning to the South. This is in step with measures in the Republic of Cyprus. We continue to liaise with the authorities and monitor the situation”.