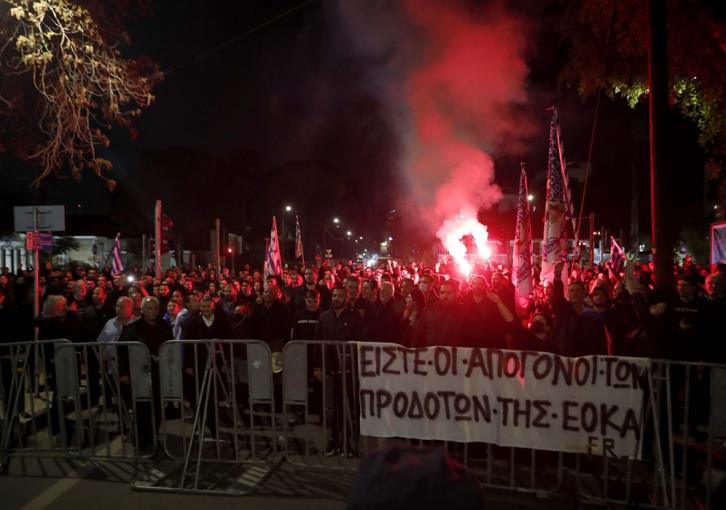 The day after the incidents outside Parliament and the offices of EDEK saw a blame game between AKEL, on the one hand, and the government and DISY, on the other hand. The main opposition accused the government of establishing, as it said, a Museum on Grivas, which opened the road for everything that took place on Thursday night outside Parliament.

“The slogan ‘EOKA B’ strikes again’ which was yesterday heard outside Parliament by the supporters of Grivas was a direct insult and a threat to Democracy and the Cypriot people,” AKEL noted in an announcement.

“The ideology of this slogan includes the fascist violence of the pro-coup period and the treason of our fatherland in 1974. This is the reason for the incidents and vandalism that occurred last night,” the announcement continued criticizing the government’s decision to spend “public money” for a “Museum” for the leader of EOKA B’.

DISY replied noting that it condemned any effort to rekindle the disastrous division of previous decades. In its own announcement, the ruling party described itself as the party that ”fought and achieved the implementation of conditions of real Democracy and National Reconciliation in Cyprus” adding that “being fully aware of the serious national and financial challenges our fatherland is facing, is asking Cypriot Hellenism to be united and to isolate all tragic nuclei of division.”

In an announcement, EDEK party whose offices were vandalized, thanked the President of the Republic, the House Speaker, and all parties for their support, noting that the party will continue to deal with these cases with sobriety, not wishing to increase “the toxicity cultivated due to expediencies.”

Also, Giannis Spanos, President of the Executive Committee of the EOKA 1955-1959, asked for unity while the resistance fighters sent the message that they would prevent those who get nostalgic about Grivas.