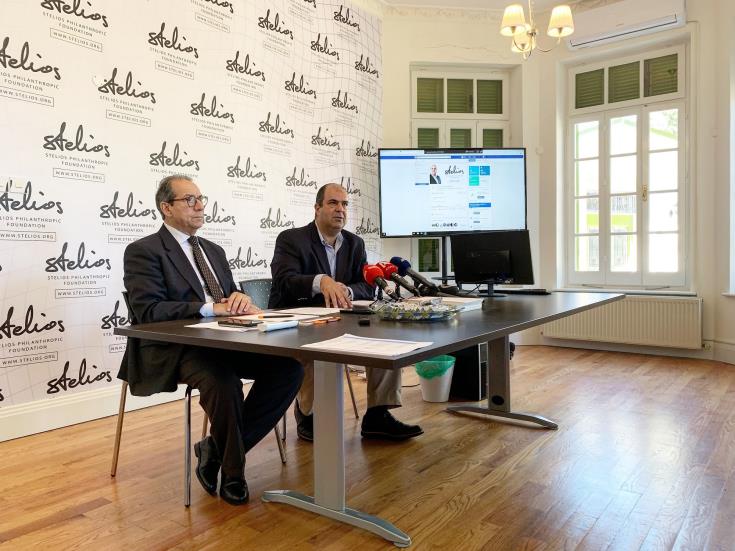 We do not expect the Cyprus problem to be solved through the Stelios Bi-Communal Awards, Sir Stelios Haji-Ioannou, founder of the Stelios Philantropic Foundation has said, adding that the main purpose of this project is to ensure that there is lasting peace on the island of Cyprus.

“It is not to solve the problem, it is not to influence political decisions, it is to make sure there is no war, to make sure that both communities are friendly to each other,” he noted, adding that these awards have also been helping the economy.

Haji-Ioannou was speaking at a press conference in Nicosia, during which he announced the launch of Stelios Bi-Communal Awards 2019, to be held for the 11th consecutive year in Cyprus, and referred to the  bi-communal “Friendly Football Day” that will take place on March 19, in the bicommunal village of Pyla,

The “Friendly Football Day” is organized by the Peace and Sport organization, based in the Principality of Monaco and under the patronage of Prince Albert II of Monaco, in partnership with the Stelios Philanthropic Foundation, and with the support of the United Nations Peacekeeping Force in Cyprus.

The highlight of the day will be a friendly football match between the Greek Cypriot football team Nea Salamina Ammochostou FC and the Turkish Cypriot Magusa Türk Gücü FC. The event, organized with the support of the European Commission, the European Parliament and Eleven Campaign, will be marked by the launching of the worldwide digital campaign #WhiteCard, cultural activities and football and karate Sport Simple workshops lead by Champion for Peace and three-time Karate World Champion Laurence Fischer.

Haji-Ioannou said that he encouraged the Peace and Sport organization to do something in Cyprus and they organized the game, with football legend Didier Drogba, who is the organization`s Vice President, being one of the guests tomorrow in Pyla. He also noted that the leaders of the two communities in Cyprus, President Nicos Anastasiades and Turkish Cypriot leader Mustafa Akinci, have been invited to attend the event.

On her part, representative of the Peace and Sport organization, Lorena Rodriguez, said that the idea is to really make a sports diplomacy event, that reinforces friendship and cooperation between the two communities, adding that this will help to send out a very strong message not only in Cyprus, but also at the international level, noting that the event will be covered by the international media as well.

Referring to the Bicommunal Awards, Hadji-Ioannou said, during the press conference, that “not only we want to encourage people to keep cooperating, but we also want to change the way people act and encourage new people to try.”

He went on to say that “the number of applications we receive every year depends on the political climate. So we are a bit of a barometer for the political climate. The peak was during Crans Montana.  The highest year was two years ago. Last year it went down but not too much, something like 20%,” Hadji-Ioannou said.

This is a marathon, it is not a sprint. We do not expect to solve the Cyprus problem tomorrow morning. It is not going to happen.
We are here to help every year with respectable prizes that go to many people, he noted.

Applications can be submitted by the 31st of July 2019. All forms of cooperation between Greek-Cypriots and Turkish-Cypriots are eligible, including business, sciences, arts, sport, NGO work and “partners in life”. Past winners and participants are always welcome to reapply. Multiple applications of each team member are also welcome with different members of the other community.

The objective of Sir Stelios’ philanthropic act is to strengthen the socio-economic ties between the two communities on the island and to encourage cooperation between Greek-Cypriots and Turkish-Cypriots. The winners will be announced at the Awards Ceremony in October 2019 in Nicosia.

By In Cyprus
Previous articleSpeaker’s ruling means no vote on PM May’s Brexit deal this week, Brexit Secretary
Next articleApartment blocks and luxury properties on auction