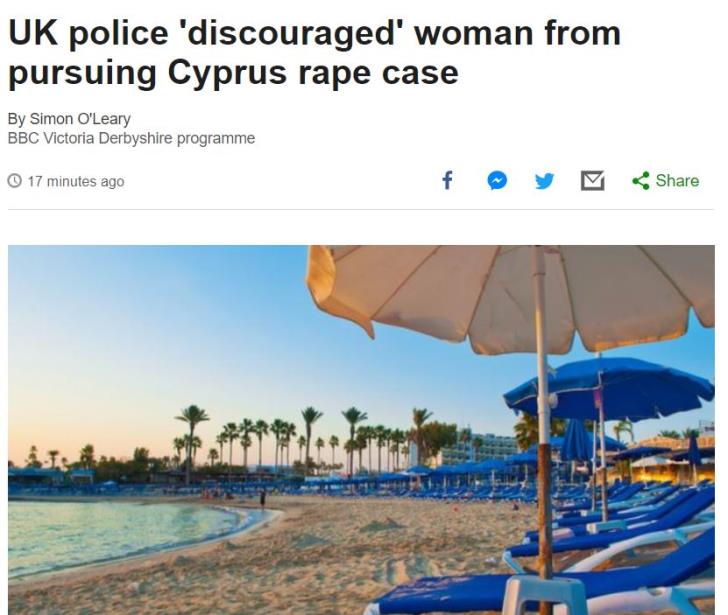 A British woman has told the BBC’s Victoria Derbyshire programme that she was raped in Ayia Napa two years ago by a Scottish man who spiked her drink at a beach party.

The video, which was posted on the programme’s Twitter page, comes after a 19year old woman was convicted to four-month suspended jail sentence for lying to police about being raped last July by 12 Israeli men.

“Sophie” told the BBC that she was discouraged by police in Scotland to report the incident saying that they were “dismissive” as the man would be hard to locate.

“They were very dismissive from the outset,” she said.

“They said they’d have to hand over to the Cypriot police.

“I asked them to check if my anonymity would be compromised and they said they didn’t know.

“They were discouraging and said it would be difficult to find the rapist, that the courts can be tough on victims and that I’d be scrutinised a lot,” she said.

According to the BBC, Sophie visited a sexual assault clinic which took swabs for evidence in case she wanted to go back to the police in the future, but she hasn’t done so yet.

Donna Duffy of the Greater Glasgow Division said they were contacted by Sophie in June 2017.

“The woman was interviewed by two specially-trained officers from Greater Glasgow Divisional Rape Investigation Unit, however, no formal complaint was made,” Duffy said.

“We are unaware of any forensic tests confirming the presence of DNA following a medical examination at a sexual assault clinic. Police Scotland thoroughly investigates all reports of sexual offences and will be responsive to the needs of the victim. Given the information provided we will make efforts to speak to this woman again in the coming days,” she added.

Asked about the incident, Sophie told Victoria Derbyshire that “the culture there (Ayia Napa) was very much men entitled to my body. A taxi driver turned up at our villa without invitation and then touched my breasts…That’s what it was like when you were there, men would just touch you…There weren’t any police or bouncers anywhere.”

Sophie said that the rape took place one night when the group were out at a beach party, and a Scottish man spiked her drink after he took her glass to fill it up.

“At this point I didn’t think anything of it because I was with my friends, this guy seemed fine…but he took me away from the party and soon after I found myself in and out of consciousness.”

Asked when she knew she had been raped, she said “The next day I was on the toilet and I pulled a condom out of my vagina, and that’s when I realised.”