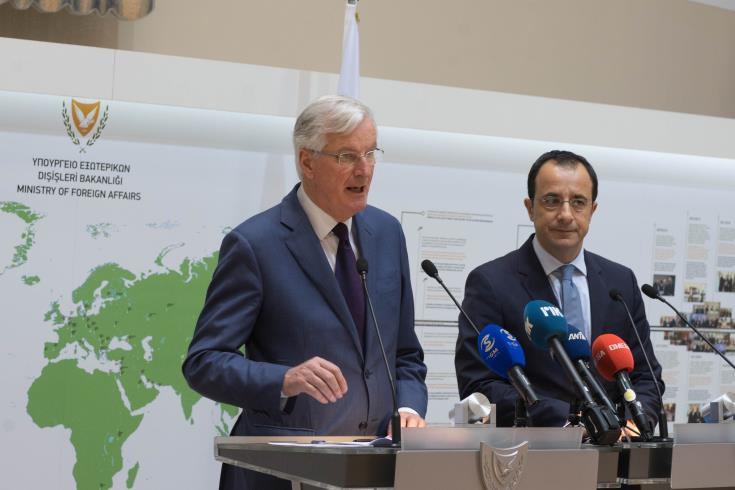 Barnier, who is currently visiting Cyprus in the context of a tour to European capitals to discuss the situation concerning Brexit, met  Cyprus’ Foreign Minister Nicos Christodoulides, who briefed him on the recent Turkish illegal operations within Cyprus’ Exclusive Economic Zone (EEZ).

Reiterating the EU’s High Representative, Federica Mogherini’s statements on May 4, Barnier also said “we express grave concern over Turkey’s announced intention to carry out drilling activities within the exclusive economic zone of Cyprus.

“In this context we urgently call on Turkey to show restraint, respect the sovereign rights of Cyprus in its EEZ and refrain from any such illegal action to which the EU will respond appropriately and in full solidarity with Cyprus,” the EU chief Brexit negotiator added.

On his part, Christodoulides said Turkey’s escalated illegal activities in the EEZ of the Republic of Cyprus violated Cyprus sovereign rights and are contrary to the international and EU law.

“Turkey’s actions, which are de-stabilising in the Eastern Mediterranean region, have drawn broad condemnation from the international community,” Christodoulides added, noting that Barnier “is well aware of the discussions we have been having with our partners in Brussels, who promptly expressed their support and solidarity with the Republic of Cyprus, on the need for the EU to react collectively and decisively to this flagrant violation of a Member State’s sovereign rights.”