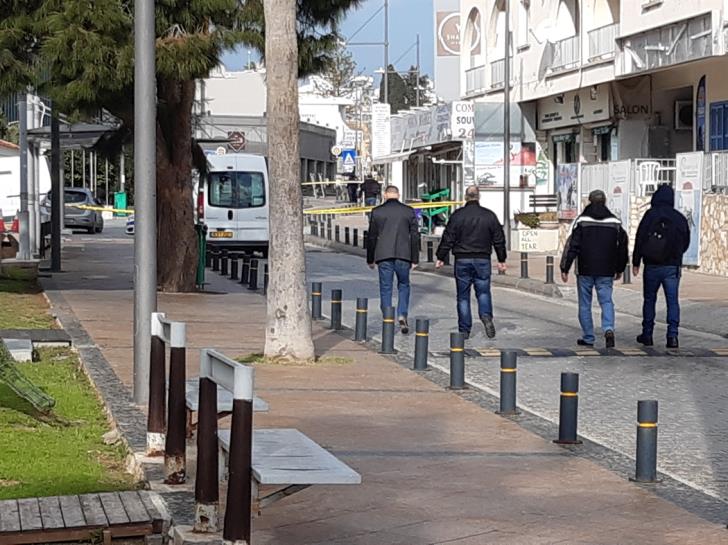 A 37-year-old man was arrested last night and remanded in 8 days custody by the Larnaca District Court today in connection with an attempted murder of a 53-year-old businessman in Ayia Napa in the early hours of last Sunday.

The suspect is already serving a life sentence in Nicosia Central Prison for the murder of five people in Ayia Napa in June 2012.

The 37-year-old was transferred to Larnaca district court this morning to be remanded in custody under draconian security measures, with members of police guarding the inside and the outside of the courtroom, while the suspect was also wearing a bulletproof vest as a precautionary measure.

The man, who police said is suspected of being the brains of last Sunday’s operation, was reportedly caught through telecommunications data that shows he communicated with the shooter through an application.

According to an investigator, the other man held in custody for the case has admitted that the suspect supplied him with information, set him up with a gun and said he had been following the target for a month. The man had previously denied any involvement.

A witness for the prosecution said that yesterday, an arrest warrant was issued against the suspect after a loaded gun was found in an open space in Ayia Napa.

Meanwhile, police are looking for the person who delivered the gun to the shooter, who is suspected to have been a middle-man between the suspect and the 38-year-old in custody.

The 37-year-old’s defence objected to his remanding in custody on the grounds of lack of proof that their client was feeding the 38-year-old with information on the target.

The court approved of the police’s request regardless, and ordered his detainment outside the Central Prison at a police station.

An insider told Phileleftheros that the current case may be connected to the 2012 quintuple murder.

The offences were committed between 13 and 16 February 2020 in Ayia Napa and, as mentioned in court, there is a written testimony involving the 37-year-old in the offences.

A lone gunman had approached a bar on foot, opened fire from the pavement, and ran off in Ayia Napa, while the attack was caught on CCTV.

Three men and a woman who were at the bar but have no connection with the intended victim were injured in the attack. Their condition has been described as out of danger.

By In Cyprus
Previous articleIrony and Joy: tribute to Beethoven by CySO
Next articleCyprus and Norway to sign MoU on energy issues