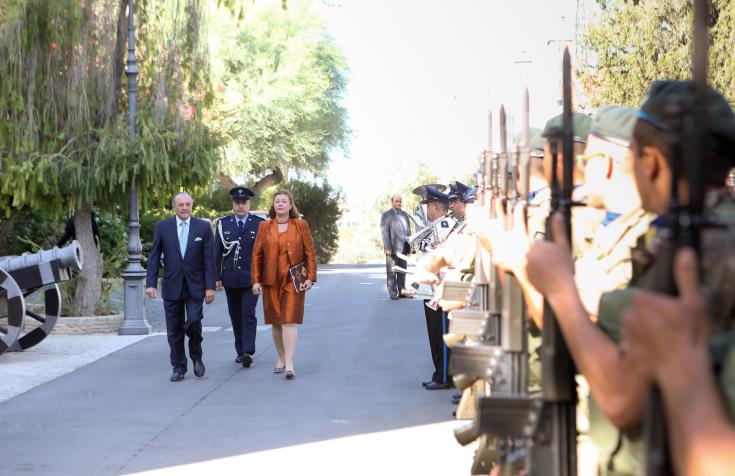 The Austrian Ambassador, whose country assumes the next Presidency of the Council of the EU (July- December 2018) spoke to CNA about the Austrian Presidency’s priorities, which include issues like illegal immigration, climate change, Brexit, as well as the Multi-annual Financial Framework post 2020 and was asked about Cyprus related issues.

Asked about Austria’s position on the Cyprus problem and if the Austrian EU Presidency will take any initiatives, she said that “Austria supports and hopes for a fair, comprehensive and viable settlement reunifying Cyprus, in accordance with the relevant UN Security Council resolutions and in line with the principles on which the European Union is founded”.

“The EU Union has always supported and accompanied the UN-facilitated negotiations on a settlement for Cyprus. Initiatives would only be taken if so wished by all sides, and in close coordination with the United Nations’ good offices mission. Austria has, nonetheless, extended an open invitation to host reunification talks” she told CNA.

Regarding the Turkish provocations in Cyprus’ EEZ and the possibility that they intensify during the Austrian EU Presidency’s term, she recalled that the unified message given in March by EU Heads of State and Government, saying that this message “has been very clear: The European Council has called on Turkey to cease illegal actions in the Eastern Mediterranean and the Aegean See and respect the sovereign rights of Cyprus to explore and exploit its natural resources in accordance with EU and International Law.”

Asked about the status of the Austrian contingent of UNFICYP and whether there will be any changes, she said that Austria is happy to continue its present engagement with UNFICYP “which is being by commended by all sides. Currently several Austrian staff officers are deployed with UNFICYP.”

Since the motto of the Austrian presidency is “A Europe that protects” the Ambassador explained that long-lasting peace, along with freedom and growing prosperity in all EU Member States, are major achievements of the European integration and must be preserved.

She stressed that today, however, Europe faces new challenges which no country will be able to address on its own.

“Globalisation leads to intensified economic competition and the consequences of armed conflicts in neighbouring regions and global migration flows are becoming increasingly difficult to cope with. Climate protection is an increasingly pressing issue, and the threats of terrorism and radicalisation are on the rise. These issues need to be addressed rapidly, if Europe wants to safeguard its achievements, values and the European way of life – and thereby maintain the support of its citizens and remain a global power. The Austrian Presidency considers it both its duty and its ambition to contribute to finding solutions to these major challenges,” she pointed out.

In addition, she told CNA that also within the European Union itself, the Austrian Presidency will encounter a very demanding environment.

“The EU will be concerned with two important topics during the Austrian Presidency which will be decisive for the future: on the one hand, the conclusion of the negotiations on the withdrawal of the United Kingdom from the European Union (Brexit), and, on the other hand, the negotiations on the Multiannual Financial Framework post 2020 following the presentation of the respective proposals of the European Commission in May and June 2018.”

Asked about the issue of immigration and what steps will the Austrian EU Presidency make towards reaching a compromise, she pointed out that the consequences of Europe’s largest migration crisis since the Second World War and the concerns of citizens about further uncontrolled migratory flows have highlighted the importance of a joint approach in the fight against illegal migration and of securing the EU’s ability to act.

She said that at the centre of these efforts are the reform of the Common European Asylum System as well as the re-focussing and strengthening of the European Border and Coast Guard Agency FRONTEX, in order to guarantee the efficient protection of the EU’s external borders.

Moreover, the Ambassador said that the aim is to work more closely with third countries in order to ensure effective return policies and to provide assistance to those in need of protection before they enter the EU while, on the other hand, preventing those not in need of protection from setting off on the dangerous crossing to Europe. “The Heads of State or Government will deal with these issues at their informal summit held in Salzburg on 20 September 2018,” she said.

“As organised crime in a globalised and converging world is operating in an increasingly connected way, the Austrian Presidency will advocate efficient cooperation of and information exchange between the security authorities of individual Member States as well as the inter-operability of the relevant large databases. Furthermore, joint efforts are needed also at European level to combat terror threats and radicalisation of all kinds,” she continued.