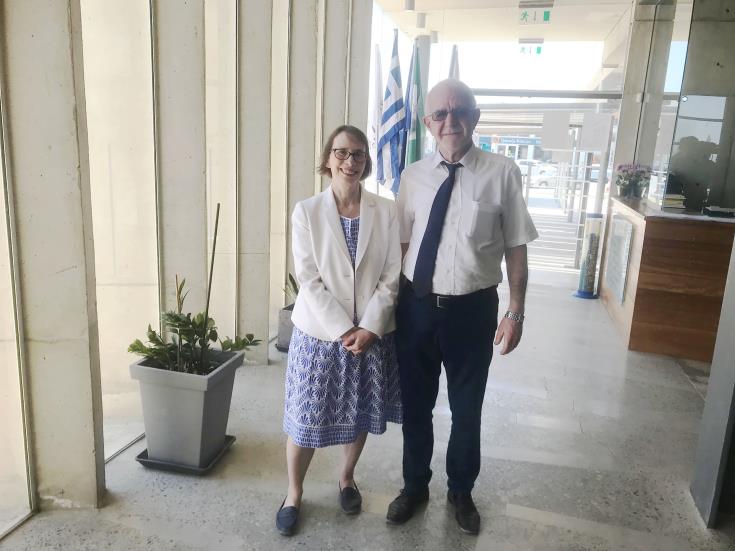 The Mayor of Athienou Kyriakos Kareklas asked US Ambassador Judith Garber to support the community’s long-standing request for the opening of the crossing point at Pyroi on the old Larnaca-Nicosia road.

The area has been blocked since July 1974, when Turkish troops invaded Cyprus and occupied 37% of the island’s northern part. Repeated rounds of UN-led peace talks have so far failed to yield results. The latest round of negotiations, in July 2017 at the Swiss resort of Crans-Montana ended inconclusively.

Several crossing points operate along the demarcation line, which divides Cyprus into the northern Turkish occupied areas and the southern government-controlled part of the country, to facilitate movement of people.

In statements after holding a conversation with Garber at the municipal hall, Kareklas said “we have asked the Ambassador’s help in order to manage to open the Pyroi crossing towards Nicosia,” he noted.

He added that he gave Garber a letter which outlines all the information on the matter and a map on which it is clearly evident that the distance between Athienou and Nicosia is by far shorter if the cross point through the Turkish occupied area were to open.

If the cross point opens, he continued, the area of Athienou will be rejuvenated and people will be able to reach Nicosia, the university, the hospital and other destinations in the capital within 10 minutes instead of the 45 minutes needed today.

The Mayor of Athienou said that the US Ambassador was first informed of this matter today and that she promised to do what she can within the framework of her capabilities.

“We requested that together with ambassadors from other Security Council permanent members countries, they bring the matter up during meetings they have with UN Secretary General`s Special Representative in Cyprus Elizabeth Spehar,” he added.

In her statement Garber spoke of the archaeological site of Malloura she visited noting that it is “very impressive” and praised the collaboration between the students and the town of Athienou.

It is “fantastic and how they are all working together to bring to light the rich history of Cyprus,” she said.

By In Cyprus
Previous article
More than 800,000 visitors, as Cyprus Casinos celebrate first anniversary
Next article
Representations being made to avert Turkish plans on Famagusta, government says