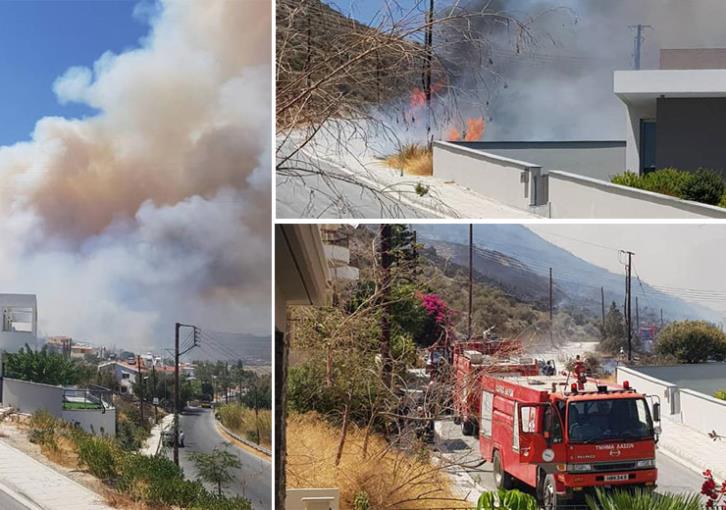 A fire at Arkounta in the Limassol district was under control by sunset having burnt one square kilometre of dry grass and wild vegetation, the Cyprus News Agency reported on Thursday.

CyBC said that an elderly couple were rescued by their son minutes before their residence was consumed by the flames. It said that fire fighters had managed to stop the blaze from gutting about 50 houses.

Fire fighters will remain on the scene  overnight to ensure  the fire is completely extinguished and prevent flare-ups.

The fire broke out around 1.15 pm in difficult terrain, fanned by strong winds. Fire fighting aircraft played a crucial role as the fire raged in areas inaccessible to fire trucks. They were able to approach the west and south west front late in the afternoon after corridors were opened up by special vehicles.

The fire fighting effort was coordinated by fire chief Markos Trangolas who told the Cyprus News Agency that efforts had focused on the west and south west fronts where there were frequent flare ups because of the strong winds.

He said police were investigating information that the fire had started close to houses, in a sparsely populated area.

Besides the dry grass and wild vegetation, the fire burnt a metal building that was used as a residence by an elderly couple. They were taken to safety by a relative.

The fire services activated the Ikaros plan to fight the fire, using eight aircraft as well as 17 fire trucks from the fire services, eight of the forestry department, two from the district office, three from civil defence and one from the Game Fund. Volunteers also joined the effort.

Because of damage to EAC electricity poles, there was a power cut in the area for a short period. Some buildings in Akrounta and Yermasoyia remain without power, the Cyprus News Agency added.

On Friday morning, a fire department spokesman told CyBC radio the fire may have started from a cigarette. He said investigations continue.
https://in-cyprus.com/news/local/fire-raging-at-akrounta/