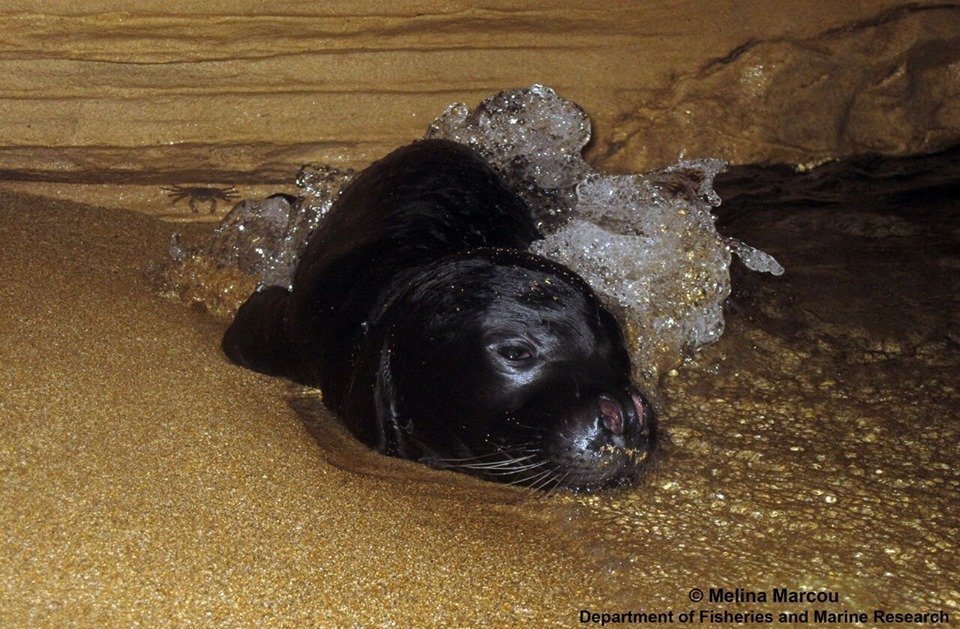 Mazut in the Peyia sea caves which host the endangered Mediterranean monk seal was cleaned up in time, the Fisheries Department said adding that there are no indications linking the mazut to the death of a five month old seal, found dead this week.

The announcement comes in response to report that there was an one month delay in cleaning the mazut from the caves, which might have led to the death of Aphrodite, a 5 month old seal who was found dead in the sea off Kato Paphos on Tuesday.

On Monday, the Fisheries Department sent a team to clean up the mazut in a cave where seals breed and rest. It said a team of  20 created a 150 metre human chain to remove about 2200 kg of mazut from the cave which was transferred to a licensed area.

Reports in the media said that there was an one month delay in the clean-up.

“The Fisheries Department, clarifies that information about an one month delay in cleaning the sea caves from mazut are not true. The Department conducted the planned cleaning, with perfectly scientific and professional way, as soon as the conditions allowed for it (calm sea),” the Department said on Thursday.

It also urged media professionals not to rush to conclusions, “especially when those are not based on scientific data and when they are not preceded by any, even a rudimentary investigation of the issue.”

Regarding the cause of death of Aphrodite, the Department said that it remains inconclusive after a post-mortem examination carried out on Wednesday.

Tests will be carried out on tissues taken from the seal in Cyprus and at the Aristotle University of Thessaloniki.

“Therefore, at this stage, safe conclusions regarding the cause of death, cannot be drawn,” it said.

The Department added that “the discovery of a dead seal is not an unusual event neither for the Mediterranean or Cyprus, where between 2001-2015, newborn seals did not manage to survive due to bad weather and rough seas.”

In addition, seal deaths were recently recorded in the occupied north, it said.

Asked to comment on criticism that authorities have not done enough to protect the seals and their refuge in Peyia, Harris Nicolaou— who coordinates Cyprus’ programme to protect the Mediterranean seal – said on Wednesday, that Aphrodite was found at a considerable distance from the sea caves.

He said Aphrodite had no external injuries and there was no clear indication of the cause of death. One possible cause of death is bacteria, he said.

Green Party: A seal had to die to learn that there was an oil rig in Peyia

Also on Thursday, the Green Party issued an announcement saying that the strategy for protecting endangered species in Cyprus has “serious gaps and shortcoming.”

The party accused authorities of deliberately misinforming the public because they hid the fact that, “for weeks now, an oil rig had been found” in the Peyia sea caves.

“A seal had to die to learn that there was an oil rig,” the party said and added that this is a “a serious issue of failure to inform the public about a major environmental issue in violation of the European directives and the Treaty of Aarhus.”

It concluded its announcement by urging authorities to “explain their failure to inform the public about a serious environmental issue”.

By In Cyprus
Previous article3rd Cherry Festival at Pedoulas
Next articleMitsero murders: Four divers from Israel to boost search for victims