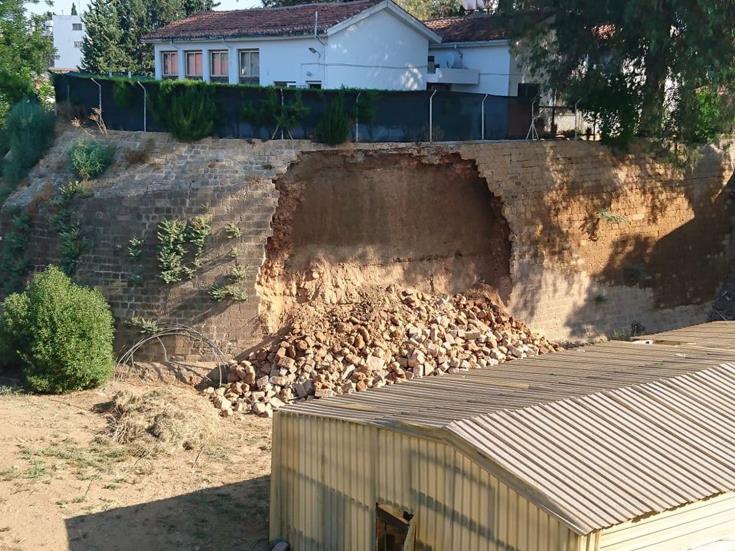 The Department of Antiquities has expressed its deep grief and disappointment over the latest  collapse of a section of Nicosia’s Venetian walls  which it said testifies to the deplorable state of preservation and neglect of the island’s shared cultural heritage by the Turkish occupation regime.

The walls of Nicosia have been a listed monument since 1935.

The collapse of this extensive section of the Quirini bastion follows the partial collapse of the curtain wall which occurred in the Ledra Palace area last March.

“This continuing destruction testifies to the deplorable state of preservation of the Venetian Walls in the occupied part of the city of Nicosia, after years of neglect on the part of the illegal regime in the north. This negligence towards the cultural heritage of our shared common cultural heritage can only be perceived as criminal,” the department said.

It is emphasised that the Nicosia Walls, which feature a circular fortification with eleven heart-shaped bastions spaced at equal distances and three gates, were designed by the then famous Italian engineer Giulio Savorgnano. They constitute a prominent fortification work of the Venetian period in Cyprus and they are considered to be a model for the asteroid city, defining European fortification architecture up until the 18th century.

Given their importance, it is imperative to safeguard them through the implementation of protective measures in order to preserve them for future generations.

“It is our hope that the damage will be repaired promptly and towards this aim, we express our support to the efforts of the Technical Committee on Cultural Heritage and our willingness to contribute to the restoration of the Mediaeval Walls, with both expertise and staff,” it concluded.