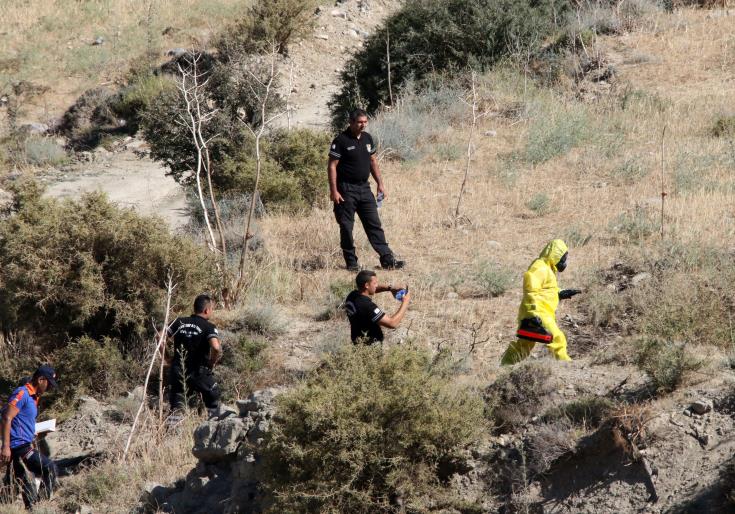 Another five pieces from a projectile believed to be a Russian-made missile have been found scattered in areas of Turkish-occupied north Cyprus, the Cyprus News Agency reported late on Monday citing Turkish-Cypriot media reports.

It said that one piece was found at Tziaos and another four in Kythrea.

The object hit a mountainside north of the capital Nicosia near the village of Vouno in the Kyrenia district, at around 1 am on Monday. setting off a fire that was contained at around 3.40 am. Pieces were also found in the garden of a house in Dikomo.

The Republic of Cyprus is in contact with other countries who “must have information” on the issue, the Cyprus News Agency said.

Yesterday, the Foreign Ministry  said authorities are continuously evaluating all pertinent information concerning what appears to have been an explosion in the air of a projectile whose debris crashed in the vicinity of Vouno in the Turkish-occupied area of the Republic of Cyprus shortly after midnight.

Meanwhile, a well-informed source told the Cyprus News Agency on Monday evening that Cyprus has anti-missile protection systems but their readiness is determined by the potential threats and the current circumstances.

The same source described the explosion as an isolated incident that does not justify readiness as if war will erupt. “One has to act by evaluating all the information at his disposal, based on the military protocols,” the same source added.

The source went on to say that “we are evaluating information related to our defence every day, and there was no reason to activate these systems.”

And the source added: “We are evaluating all the details concerning this incident. We are activating the mechanisms of contact with countries from which we believe that we may take information to evaluate the incident with a view to draw reliable conclusions.”

Among these countries is the UK which maintains two military bases on the island.

Meanwhile the Mediterranean Flight Safety Foundation Executive Director, Christos Petrou told CNA, that “a missile which enters the FIR constitutes a danger for the flights’ safety and this is something that concerns us”.

“Such incidences pose a threat to flights of civil aircraft, particularly those which are landing or taking off, or have to fly at a lower altitude for any reason,” he concluded.