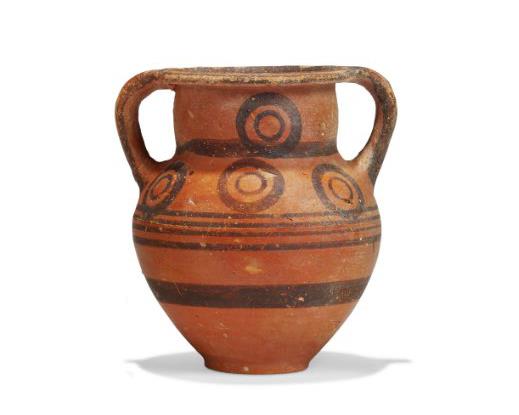 An ancient urn given as a gift by then Cyprus President George Vassiliou to Margaret Thatcher when she was Britain’s Prime Minister has been auctioned by Christie’s for £6,000 with an estimated value of £1,000.

Cypriot art historian Maria Paphiti was the one to recently identify the ancient urn – auctioned in May – during research work on ancient Cypriot pottery, Phileleftheros said on Saturday.

Paphitis said it was not clear whether the family of late Thatcher or Downing Street itself had sent the ancient urn for auction.

As for former first lady Androulla Vassiliou, she said that it was not a personal gift but one from one head of state to another, thus, the urn should have stayed at Downing Street.

“Both my husband and I were saddened when we heard from Mrs Paphiti that the urn had been auctioned. It wasn’t a gift from my husband to a friend,” she said.

“However, when such urns are handed out by Cypriot Presidents to Heads of State an approval by the Department of Antiquities is mandatory and the items are usually not priceless,” she added.

An envelope presented by Christie’s during the auction was labelled “Prime Minister” and also said: “An ancient Cypriot urn given to me by President Vassiliou.”

On the origins of the urn, Christie’s had noted: “This was given to Margaret Thatcher while she was Prime Minister of the United Kingdom (1979-1990) by President George Vassiliou of Cyprus (serving from 1988-1993)”.