Anastasiades: We expect Turkey to display political resolve for the solution of the Cyprus problem 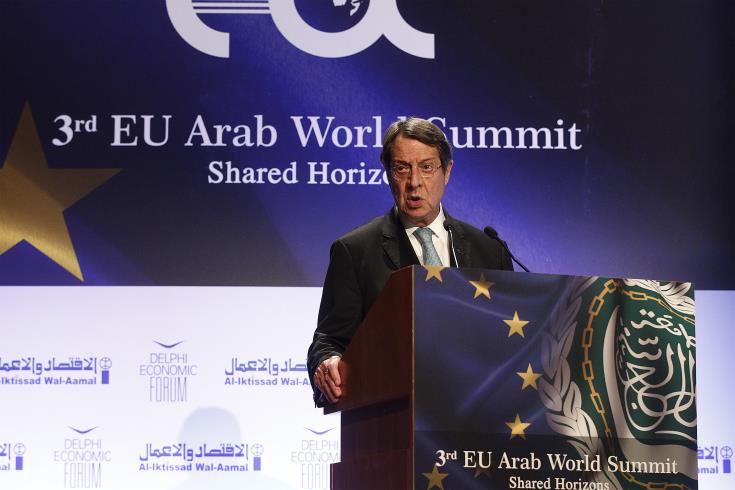 A viable and functional solution of the Cyprus issue shall yield tremendous benefits, representing a model of peaceful coexistence, said President Nicos Anastasiades in his speech to the “3rd EU-Arab World Summit: Shared Horizons”, taking place in Athens.

“We want a solution that will meet the expectations of the people, both the Greek Cypriots and the Turkish Cypriots. A solution of cooperation, at the level of culture, language and religion between Christian and Muslim communities. A solution for the prosperity of the people”, he said.

The Republic of Cyprus expects Turkey to display political resolve for the solution of the Cyprus problem, he added and stressed that Turkey should stop expressing claims which are incompatible with the principles of a sovereign and independent European state.

The president also referred to the discovery of hydrocarbons in the region, as a development that generates new prospects for cooperation, economic benefits, and conditions of added value for the countries of the European Union.

According to President Anastasiades the EU and the Arab states “must come together in order to resolve serious issues, such as safety in our region. Phenomena, such as terrorism, religious fundamentalism, and territorial violations, have led to unprecedented instances of exclusion of millions of citizens.”

As President Anastasiades suggested, these current challenges attest that it is imperative for EU and the Arab states to strengthen their political and socio-economic cooperation in order to: resolve the unprecedented humanitarian crisis in the region, set up and reinforce programmes for sustainable development and socio-economic stability, and deal with the migration issue in a manner that all parties involved are allocated their equitable share of responsibility.

By In Cyprus
Previous article
There is no economic bubble, Finance Minister says
Next article
Yuvarlakia