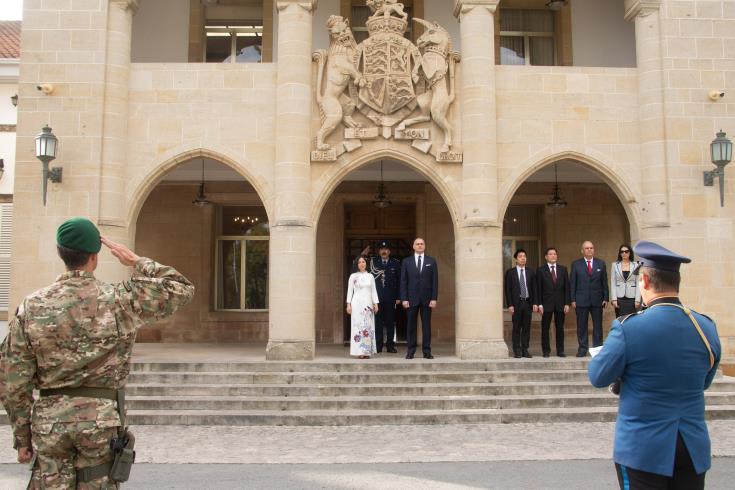 Turkey’s actions, apart from escalating tensions in our already turbulent region, have also a huge negative effect on our efforts to resume the peace process and do not create the necessary conditions for all parties to engage in a results-oriented dialogue, President Nicos Anastasiades has said.

Receiving on Thursday the credentials of Vietman’s Ambassador, based in Rome, Nguyen Thi Bich Hue, the President noted that, regrettably, Turkey continues to act as a “spoiler” by, amongst others, turning to military threats, illegal drilling activities within the Exclusive Economic Zone of the Republic of Cyprus, threats to open the fenced-off city of Famagusta and signing an illegal Memorandum of Understanding on the delimitation of maritime jurisdictions in the Mediterranean Sea with Libya.

“Actions which have been condemned in the strongest manner by the international community and the EU, since they do not comply with the notion of good neighbourly relations, international law and particularly the United Nations Convention on the Law of the Sea, and infringe upon the sovereign rights of third states.  We do hope that Turkey will finally adopt a more realistic and constructive approach by refraining from actions which do not create the necessary conditions of establishing an environment conducive to having productive negotiations on an equal footing”, the President said.

He also expressed hope that Turkish stakeholders will finally acknowledge the overwhelming benefit of becoming part of our regional cooperation agenda and of positively working towards a viable solution to the Cyprus problem which would reunify Cyprus and its people and enhance regional stability.

“Despite the challenges we face, I wish to assure you that I remain strongly committed in engaging in a new round of negotiations, once conditions permit it, with the aim to reach a lasting, viable and comprehensive settlement to the Cyprus issue, in line with the European acquis, international law and the relevant UN Resolutions. A settlement that will safeguard the sovereignty and territorial integrity of the Republic of Cyprus, ensuring the peaceful and prosperous co-existence of all Cypriots, Greek and Turkish, without any third country dependencies, military troops and guarantees”, he noted.

Referring to the bilateral ties, the President expressed his belief that these can be further enhanced by expanding the cooperation in a number of fields such as those of finance, investment, maritime affairs, tourism, as well as education. He added that this will provide both countries with the possibility to strengthen our bonds and bridge the geographical distance between our respective countries.

“At the same time, I am pleased to attest that people-to-people contacts and trade between Cyprus and Vietnam have developed progressively, setting the grounds for a promising future in our relations. Cyprus considers Vietnam as a reliable partner for the EU in Asia, with a role in forging strong bonds between Asia and Europe. The EU-Vietnam Free Trade Agreement together with the Cooperation Agreement on Partnership and Development, are another proof of the EU’s commitment to deepen and expand our partnership. In this regard, Cyprus will continue offering its support to Hanoi to further enhance its relations and cooperation with the Union”, he noted.

The President also referred to the financial situation following the 2013 economic crisis saying that the positive outlook of the Cypriot economy, as well as effective actions in the banking sector, have strengthened the confidence of investors and of International Credit Rating Agencies, reflected through a number of successive upgrades, currently classifying Cyprus at the investment grade.

“Our commitment as a Government is to remain focused on maintaining and broadening the conditions under which surpluses and high growth rates can be generated, to continue promoting structural reforms and improving the country’s business environment”, he concluded.

Presenting her credentials the Ambassador said that since the establishment of diplomatic ties between Viet Nam and Republic of Cyprus in 1975, the bilateral relations have developed smoothly, featuring close exchanges and cooperation in many areas of common interests, notably trade, education and tourism. She also referred to the upcoming visit to Vietnam of Foreign Affairs Minister, who will be accompanied by an important businesses delegation, which, she added, provides a clear signal of the strengthening partnership between Viet Nam and the Republic of Cyprus and lays stronger framework for future cooperation between the two sides.

“Being concurrently the Chair of ASEAN in 2020, Vietnam would look forward to the continuous cooperation with the Republic of Cyprus to successfully meet the expectations that the international community has placed upon our country. Economic cooperation is another important aspect of our fruitful relationship. With the EU – Vietnam Free Trade Agreement (EVFTA) soon to be in force, I believe that it will generate great opportunities for businesses in both Viet Nam and the Republic of Cyprus to cooperate and thrive together, bringing major benefits for our people and economy in the near future”, she said.

The Ambassador also referred to the Vietnamese community in Cyprus, pointing out that she is delighted to learn that the community is making good contribution to the economic and societal development of this beautiful country and also to its multicultural fabric.

Cyprus remains divided since 1974, when Turkish troops invaded and occupied 37% of its territory. Repeated rounds of UN-led peace talks for a Cyprus settlement have so far failed to yield results. The latest round of negotiations, in July 2017 at the Swiss resort of Crans-Montana ended inconclusively.
(Cyprus News Agency)

By In Cyprus
Previous articleChinese public mourns, rages over death of doctor who raised early alarm on coronavirus
Next articleUNSG monitoring the developments in the EEZ of Cyprus closely with concern