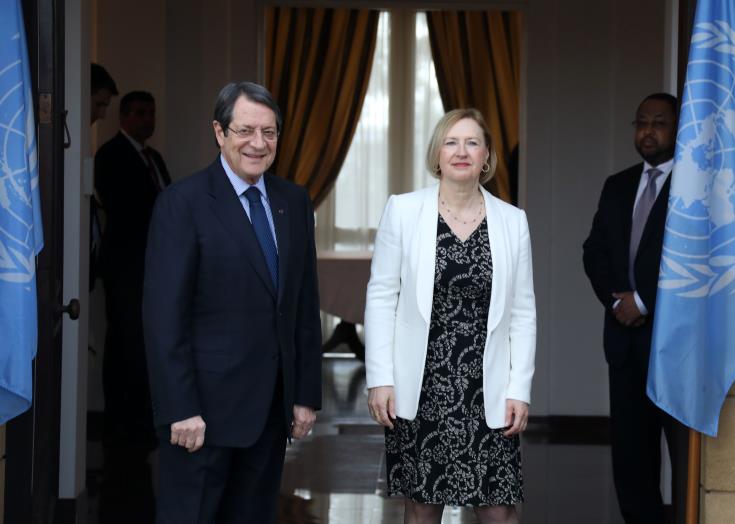 President Nicos Anastasiades on Wednesday raised Turkey’s violations in the EEZ and territorial waters of the Republic of Cyprus  with the Special Representative of the UN Secretary-General in Cyprus, Elizabeth Spehar.

Speaking after the meeting at the President’s residence, in Limassol, Government Spokesman Prodromos Prodromou said that President Anastasiades and Spehar met today, ahead of the Secretary-General’s report on the peacekeeping mission (UNFICYP) to be submitted to the Security Council.

“The President raised Turkey’s actions in our region, the violations taking place in the sea, the territorial waters, the EEZ of the Republic of Cyprus, actions which certainly impede the process for a Cyprus settlement” Prodromou said, referring to the resumption of settlement talks.

He added that the President conveyed during the meeting his readiness to meet with the Turkish Cypriot leader Mustafa Akinci the soonest possible.

Asked if Confidence Building Measures (CBMs) for mobile networks were also discussed at the meeting, the Spokesman confirmed that there are decisions regarding mobile interoperability, which will be implemented. Furthermore, he said that all topics that are part of the UNFICYP report were discussed on Wednesday.

CBMs are certainly a positive development, Prodromou went on, he pointed, however, to a series of problems close to the ceasefire line, involving the Turkish army. The Spokesman expressed the government’s anticipation that all relevant incidents will be included in the report, not just to be denounced but in order to put an end to these negative developments through appropriate measures, as he said.

The Spokesman was also asked about government expectations in relation to EU sanctions against Turkey. He replied that on June 20, the European Council took a very important decision to consider sanctions, which are now under discussion. “We are still in this process. There is no other comment at this time,” Prodromou said.

On another question, regarding Turkish drilling plans in the region until 2023, including Cyprus’ EEZ, the Spokesman said that “this is the situation we have to deal with, which presents a deterrent, dissuasive factor for a Cyprus settlement.” He went on to say that “it is exactly this state of affairs that we are dealing with, together with the European Council and the decisions that have been taken.”

Replying to another question, Prodromou said that there are no “grey areas” when it comes to the Republic of Cyprus exercising its sovereign rights. “There is the UN Convention on the Law of the Sea, on which the Republic of Cyprus relies on and which forms the basis for the statements on behalf of all the international community, either the EU or other important states” he added.

Therefore, there are no ‘gray areas’ in international law, he added while noting that the Republic of Cyprus takes decisions, concludes agreements and exercises its sovereign rights as an independent state.

Asked to comment on statements from countries, which call on sides to refrain from actions that increase tension in the region, and whether they also refer to the Republic of Cyprus, Prodromou said that these references point to those who create tension, disrupt and destabilise with their actions. The Republic of Cyprus is not among them, he concluded.

The EU High Representative Federica Mogherini issued subsequently a statement, warning Turkey over its intended new drilling operation. She recalled that Turkey`s continued actions have a serious negative impact across the range of EU-Turkey relations and that “as mandated by the European Council, the Commission and the EEAS are about to present options to the Council for appropriate measures.”

By In Cyprus
Previous articleRadisson Blu expands Cyprus portfolio with serviced apartments
Next articleThe Guardian: meet the chefs working together across the divide