Anastasiades-Lillie meeting: ‘No change to daily life of citizens post-Brexit’ 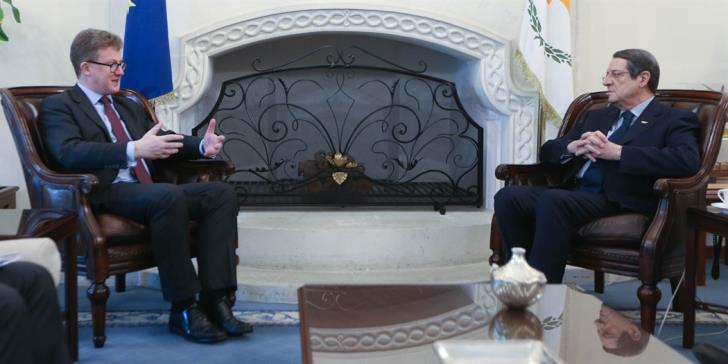 There will be no change to the daily lives of UK citizens in Cyprus or of Cypriot citizens in the UK, especially Cypriot students following Britain’s exit from the EU.

This assurance was given at a meeting today between President Nicos Anastasiades and UK High Commissioner Stephen Lillie at the Presidential Palace. Government spokesman Kyriakos Koushos told reporters the meeting was requested by the High Commissioner in view also of the UK leaving the EU.

Britain officially left the EU at 11 pm on Friday. There will be little change during the transitional period until the end of 2020 during which the two sides will seek agreement on their future relationship.

Koushos said that at Monday’s meeting, both sides had given assurances there would be no change in the ordinary lives of UK citizens in Cyprus and Cyprus citizens — particularly students — in the UK.

The Cyprus issue and bilateral relations and trade were also discussed at the meeting, the spokesman added. Asked whether British citizens will be able to buy property in Cyprus, Koushios said these were special issues which have not been decided, however the general position was that the rights of Britons to visit or live in Cyprus or buy property here will not be affected. “This is an issue which will be discussed and handled by the Foreign and Interior Ministries,” he said.

Speaking to reporters, High Commissioner Lillie  noted that over the weekend the UK had “opened a new chapter in the history of our country in which we are free to be bold, self-confident, ambitious on the international stage, forging new partnerships around the world.”

He added that “at the same time we are very much treasuring the connections, the relations and our shared interests with our European friends.

“I have reassured the President about continuing commitment to a strong, wide-ranging, very deep relationship between Britain and Cyprus in the future based on shared values, shared history, the membership in the Commonwealth, our large communities of Cypriots in the UK and Britons in Cyprus. The President very much agreed with me on that.”

He added that “we remain closely connected and we do have so much in common and so much we want to work together on in the future whether that is on the most important issue for Cypriots, which is the reunification of the country, and also on the big international challenges of the century, particularly the fight against climate change.”

The UK High Commissioner noted that “we talked about our citizens and I was very grateful for what the President said about his commitment to protecting the rights of our citizens here in Cyprus ensuring continued access to healthcare.”

He also said that Cypriot nationals can continue to travel to the UK without a visa and even without a passport, by only using their ID card.

“This is just one of the things we are doing to ensure the relationship between the UK and Cyprus remains as strong as it has ever been.”

By In Cyprus
Previous article
Boat with 80 irregular migrants off Cape Greco
Next article
Average wages in Cyprus 7% lower than 10 years ago, ETUC study shows