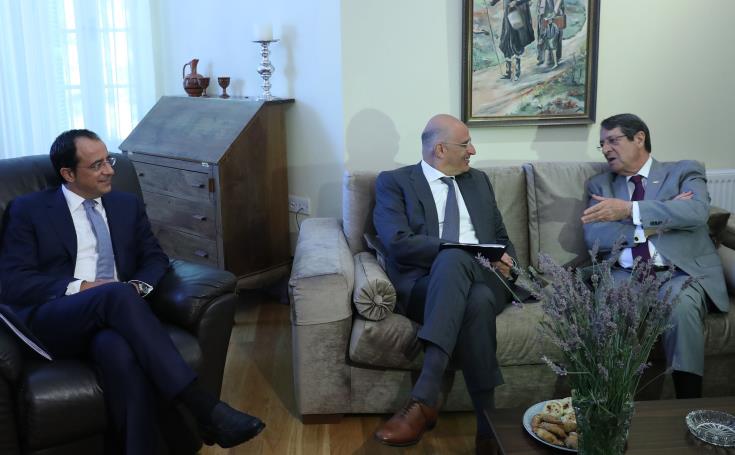 The coordination of actions between Cyprus and Greece in light of Turkish provocations in the East Med was discussed at the meeting held today Tuesday, between Cyprus’ President Nicos Anastasiades and Greek FM Nikos Dendias.

Dendias, who is paying Cyprus a working visit, was received by President Anastasiades at the presidential residence in Troodos today.

After the meeting, President Anastasiades wrote on his twitter account “with the Foreign Minister of Greece @NikosDendias we had a highly productive meeting today, discussing the common line of Cyprus and Greece to address the Turkish challenges and de-escalate the tension in the region”.

Dendias was accompanied by his Cypriot counterpart Nikos Christodoulides, with whom he will hold a tête-à-tête meeting later on, followed by consultations with the participation of officials from both countries.

The agenda of discussions will focus on recent developments in the East Med and the escalation of Turkish illegal actions in the region.

Moreover, it will include Greek-Cypriot cooperation both at a bilateral and European level, as well as in the context of trilateral alliances in the region.

Christodoulides and Dendias will make press statements after their meeting.