Anastasiades: conference on Cyprus not feasible when country under threat by Turkey 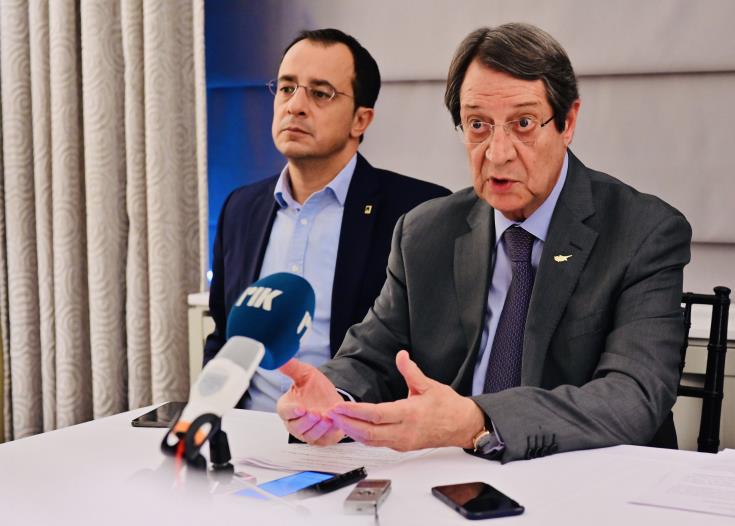 President Nicos Anastasiades clarified that a conference on Cyprus is not feasible at a time when the country is threatened by Turkey.

Speaking to reporters after arriving in New York where he will address the UN General Assembly later next week, Anastasiades underlined that he has the political will and determination to contribute to efforts to draft the terms of reference that will allow the resumption of a constructive dialogue.

“This year’s General Assembly coincides will the UN effort to agree on the terms of reference allowing the resumption of a constructive dialogue. I come forward with determination and political will to contribute to what we are trying to achieve since the talks in Crans Montana failed”, the President said.

Noting that this week each side will be tested, the President said he did not believe that the Greek Cypriot side will be the one to topple the UNSG’s initiative.

“What I want to stress is that I remain committed to everything that we have agreed with (Mustafa) Akinci on the 9th August during our informal meeting, that I insist on what I have accepted which is nothing other than the first document which Mrs. Lute prepared on the first day”, ie 2nd September. The UNSG had underlined that “prior to resuming full-fledged negotiations, the sides should agree on terms of reference that would constitute the consensus starting point for a possible negotiated conclusion to the Cyprus issue.”

President Anastasiades described as crucial the meeting he will have on September 27 with UNSG and later on with the representatives of the Five permanent Members of the UN Security Council, the Russian Foreign Minister and China’s FM. He also said that in his address to the UN General Assembly, he will refer to Turkey’s unlawful actions.

In response, EU Foreign Ministers endorsed on July 15, 2019 measures concerning Turkey’s illegal drilling in the Exclusive Economic Zone (EEZ) of Cyprus. In accordance with the 20 June 2019 European Council conclusions, Foreign Ministers also invited the High Representative and the European Commission to continue working on options for targeted measures in light of Turkey’s continued drilling activities in the Eastern Mediterranean.

“It is inconceivable at a time when the SG is suggesting ways to resume a dialogue, for Turkey to question the sovereignty of the Republic of Cyprus in the country’s EEZ or on land with statements about settling the Varosha area”, the President added.

President Anastasiades underlined that Cyprus is not alone in its efforts, it is closely working with the Greek government and that after his speech on Thursday before the UN General Assembly he will meet with Greece’s Prime Minister Kyriakos Mitsotakis who will have already met with the Turkish President.

The President will also hold meetings with the Prime Ministers of India and Northern Macedonia, American-Jewish organisations and the diaspora leadership.

Asked how the SG will convene a tripartite meeting and then an informal conference on Cyprus if Turkey continues with its provocations, the President said this will not work.

President Anastasiades said he is certain that the SG would not convene a conference on Cyprus when Turkey continues to violate international law.

In his statements, President Anastasiades referred to the meetings Foreign Minister Nikos Christodoulides will have.
He also said that on Monday he will take part in the conference on Climate Change and will inform the SG on the initiatives that Cyprus is promoting.

“I have already informed 13 heads of state or government in the Middle East and the Arab Gulf about the initiative, he added.
On Sunday, President Anastasiades will meet the leadership of the American Jewish Committee and in the evening attend dinner with the leadership of the Federation of Cypriot American Organizations.

On the 24 September, President Anastasiades and First Lady Andri Anastasiades, will attend a reception hosted by the UN Secretary General for the heads of states who will take part in the General Assembly. He will also confer with Prime Minister of North Macedonia, Zoran Zaev.

During his stay in New York, the President will be accompanied by foreign Minister Nikos Christodoulides, Government Spokesman Prodromos Prodromou, the Republic’s Permanent Representative to the UN, Ambassador Andreas Mavroyiannis and other officials.

The President returns on September 29.