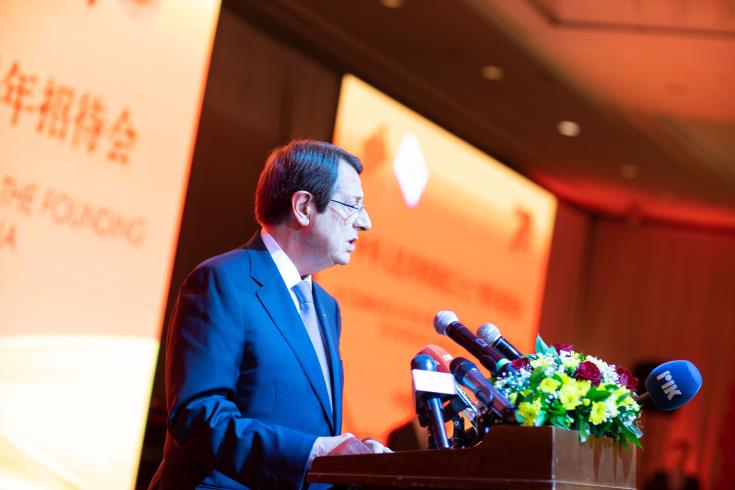 President Nicos Anastasiades, has called on the international community to condemn Turkey’s actions in the Exclusive Economic Zone of Cyprus and those concerning the fenced off area of Famagusta.

Speaking on Tuesday at a reception on the occasion of the 70th anniversary of the founding of the People’s Republic of China, in Nicosia, the President also stressed that China’s support becomes even more important taking into account its position as a permanent member of the UN Security Council, amidst a period of renewed tensions and violations by Turkey.

In his speech, the President noted that Cyprus highly values and is grateful for China’s principled stance and support regarding the Cyprus problem and the Government’s efforts to reunify the country, in accordance with the relevant UN Security Council Resolutions, international law and the EU acquis.

He underlined that China’s support becomes even more important taking into account its position as a permanent member of the UN Security Council, amidst a period of renewed tensions and violations by Turkey, such as illegal drilling operations in the Exclusive Economic Zone of Cyprus, in clear violation of its sovereign rights in contrast to the UN Convention on the law of the Sea, as well as recent actions and statements alluding to plans of the Turkish side for a potential opening of the fenced area of Varosha, again in violation of international law and the UN Security Council Resolutions 550 and 789.

“The aforesaid actions should be clearly condemned by the international community since they do not only contradict the UN Charter and international law, but they also pose a threat to peace and stability in Cyprus and our immediate region and run contrary to the necessity of having a positive climate in place, conducive to resuming negotiations with the aim of reaching a comprehensive and viable settlement to the Cyprus problem”, Anastasiades noted.

The President reiterated that he remained strongly committed and determined to do his utmost to support the efforts of the UN Secretary General’s special envoy, Jane Holl Lute, to reach an agreement on the “Terms of Reference”, so as to pave the way forward for the resumption of the negotiating process.

“And I wish to reiterate that our primary focus and top priority remains none other the reunification of Cyprus without any external interference, foreign guarantees and military troops, as a truly independent and sovereign state”, he said, adding that “in this regard, as it is understandable, the necessary conditions for the resumption of meaningful negotiations should be in place and we hope that Turkey will finally actively contribute to creating an appropriate to holding talks climate by ending its unlawful activities”.

Earlier, upon his arrival at the event, the President told reporters that when the case of Turkish provocations in the fenced off area of Famagusta is taken before the UN Security Council it will be announced.

In his speech at the reception the President noted moreover that Cyprus and China share the same views on multilateralism, dialogue, cooperation and the peaceful resolution of conflicts, on the basis of international law and the indispensable role of the UN. “It is within this context and as a matter of principle and respect of international law that Cyprus remains consistently committed to the One China Policy and a strong supporter of the integrity, unity and sovereignty of China,” he noted.

The President said that Cyprus’ bonds with China are deeply – rooted and added that Cyprus was ready to advance this partnership in a multitude of areas, seizing the new opportunities presented and providing a strong impetus to further enhancement of their bilateral relations.

Anastasiades spoke of a constantly evolving and deepening partnership between Cyprus and China, on the basis of mutual respect and understanding.

Moreover, the President reaffirmed the Government’s support to the Silk Road initiative and said that he was pleased to assess that the second Belt and Road Forum held this past April provided a renewed impetus as regards joint efforts to fully materialise the objectives of the Belt and Road Initiative.

Concluding, he stressed that the Government stands ready to work closely with the Chinese Government in promoting the Silk Maritime Road, as well as further promoting and advancing the strategic partnership between China, Cyprus and the EU through a frank and open dialogue, which is a vital part in building mutual trust and understanding.
(Cyprus News Agency)