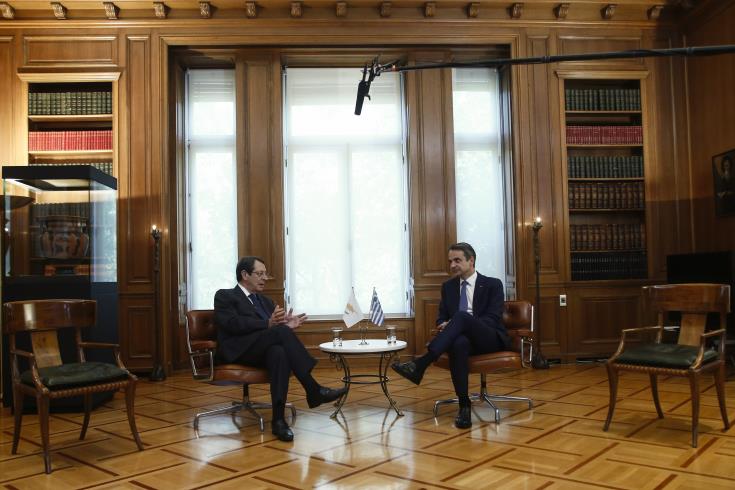 The Informal meeting on Cyprus issue set to place in Geneva, the European Council meeting on March 25 and the implementation plan for EastMed were the issues discussed between Cyprus President Nicos Anastasiades and the Greek Prime Minister Kyriakos Mitsotakis during a long telephone conversation they had on Monday.

In a written statement, Government Spokesperson Kyriacos Koushos said that during their communication which was held on the initiative of the Greek Prime Minister, a briefing was given in view of the convening by the UN Secretary General of the informal meeting on Cyprus to be held in Geneva on April 27-29, as well as ahead of the visit of the Special Envoy of the UN Secretary General for the Cyprus issue Jane Holl Lute to Cyprus and then to Greece.

Koushos said that Anastasiades and Mitsotakis exchanged views and agreed on joint actions that to be taken in view of the European Council in Brussels on March 25.

Regarding the reports on the plans for the implementation of the EastMed pipeline, the Government Spokesperson notes in his statement that the Prime Minister of Greece assured that neither side raised the issue of cancelling the construction of the project, as it is planned and clarified that the bilateral talks with Egypt concern the possibility of building an additional pipeline for the supply to Greece of natural gas from Egypt.

Koushos also said that President Anastasiades accepted the invitation of Greece’s Prime Minister to participate in the celebrations that will take place in Athens, on March 24 and 25, on the occasion of the 200th anniversary of the Greek Revolution of 1821.