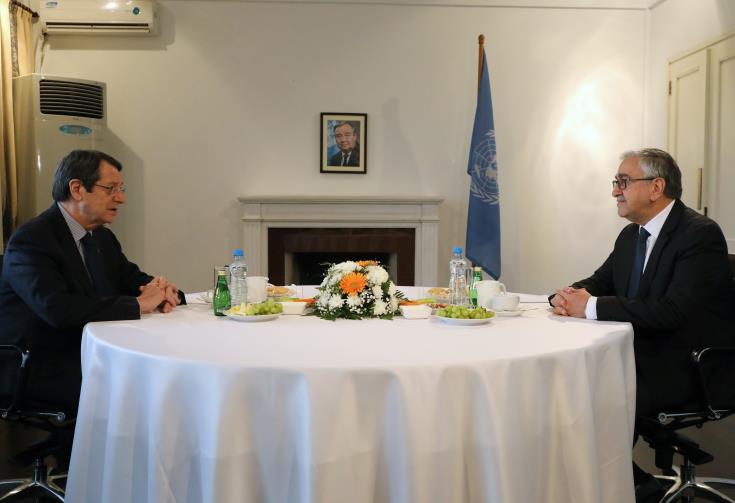 Cyprus’ mobile telephone networks on either side of the Green Line are to be linked through a hub based in Europe, President Nicos Anastasiades and Turkish Cypriot leader Mustafa Akinci agreed on Tuesday.

It was one of a series of confidence building measures agreed during their informal meeting at the home of the UN chief of mission under the auspices of UN special representative Elizabeth Spehar.

They also agreed on further demining and the return of works of art.

In a written statement, the UN said the two leaders had had a constructive exchange of views in a cordial atmosphere. Anastasiades presented his ideas on decentralisation and the two leaders discussed in depth the basic principles.

Regarding confidence-building measures, the leaders committed to intensifying the work of the Technical Committees with the objective of improving the daily lives of all Cypriots.

“The two leaders decided to implement the confidence-building measure regarding mobile phone interoperability through separate agreements of the operators on both sides with a hub based in Europe, in order to facilitate greater interaction between the two communities,” the statement said.

The interconnectivity of the two electricity grids, as agreed in 2015, has now been achieved. “In this regard, they decided to make the temporary electricity supply arrangement permanent and without restriction. They acknowledged that the transfer of electricity will continue on an as-needed basis,” the statement added.

The leaders agreed to the clearance of nine suspected hazardous areas on both sides of the island, with a view to working towards a mine-free Cyprus.  As a gesture of good will,  Akincı conveyed the decision of the Turkish Cypriot side to return paintings by Greek Cypriot artists that remained under protection on the Turkish Cypriot side since 1974.

“Mr Anastasiades similarly conveyed to Mr  Akıncı the Greek Cypriot side’s decision to hand over visual and audio recordings of Turkish Cypriot artists that exist in the archives of the CyBC, belonging to the pre-1963 period. The two leaders have tasked the Technical Committee on Culture to realise the exchange of these invaluable works of art, belonging to the respective communities,” the statement added.

SRSG/DSASG Elizabeth Spehar, pictured with @AnastasiadesCY & @MustafaAkinci_1 ahead of their informal meeting at the UN Protected Area today. pic.twitter.com/KpPGiohRuU