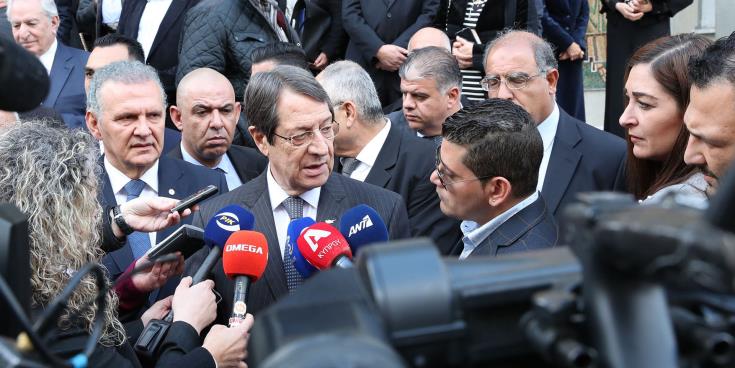 President Anastasiades, has said that the idea of the decentralisation of powers speaks for itself, and that it is a matter of dialogue to agree upon which powers will be distributed to each constituent state, in order for the two communities in Cyprus  to feel safer and that one will not create problems for the other, in the context of a solution to the Cyprus problem.

The President was replying to journalists’ questions after having attended and addressed a mass on the occasion of the name day of Saint Maroun, in Nicosia.

If by “political equality”, he said, the other side, means the necessity for a positive vote for each decision taken by the central government or other institution, “I regret to say, that this would not be political equality but rather something that creates political inequality.”

Because, he explained, it would allow “one community to impose (its will) on the other.”

Asked whether he is ready to explain his thoughts on the decentralisation of powers to Turkish Cypriot leader Mustafa Akinci, he noted that “I think that the principle of decentralisation speaks for itself.”

From then onwards, he added, “it is a matter of dialogue to jointly agree which (powers) will be distributed to the constituent states.”

“If the principle is accepted then it is a matter of dialogue to see what will be distributed to the constituent states, so that the two communities will feel safer and that one will not create problems for the other, that the state will be functional, it will be viable and therefore a positive vote will not be necessary for all decisions,” President Anastasiades said.

Replying to a journalist’s comment that it does not seem that the UN Secretary General’s envoy Jane Holl Lute has a complete picture before her and asked whether this makes it difficult to reach an agreement on the terms of reference for the resumption of Cyprus talks, he said that he did not want to comment on that specific matter, adding that whatever is written down and whatever should be of concern, will be discussed by relevant bodies and not be part of public discourse.

It has been announced that UN Secretary General’s Special Representative in Cyprus and Deputy Special Advisor on Cyprus, Elizabeth Spehar, will host an informal meeting of the leaders of the two communities on February 26, at the Chief of Mission’s residence.