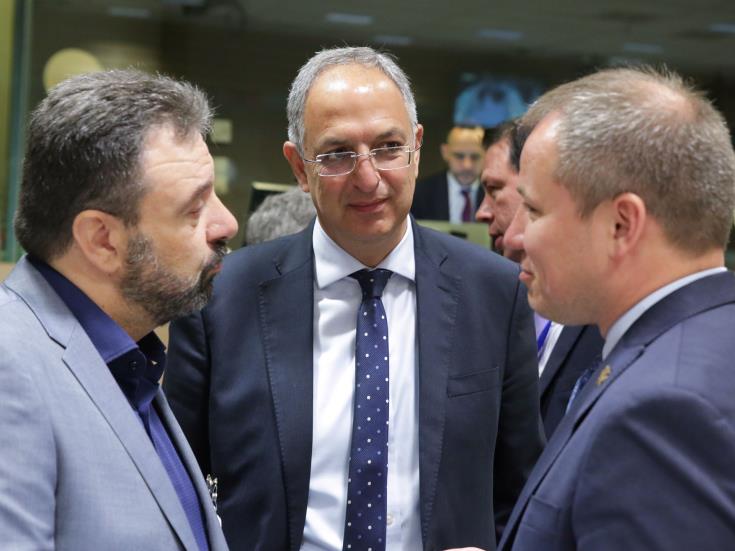 In his intervention to the EU Agriculture and Fisheries Council, held today in Brussels, the Minister also reiterated the need to simplify the procedures for implementing CAP measures so as to facilitate both administrations and farmers.

He also stressed the importance of providing the necessary flexibility in the design and implementation of the measures, in order to adapt them to the specific circumstances of each Member State.

Furthermore, when the Commission raised the issue of animal welfare during transport over long distances within and outside the EU  the Minister for Agriculture shared the Commission`s concerns  and stressed that “the issue of the protection and welfare of livestock is high on the priorities of the Ministry”.

He also made special mention of the fact that on the coasts of Cyprus, due to its location, during the summer season, dead animals are thrown into the sea when they are transported to different destinations.

On the sidelines of the Council, the Minister of Agriculture had his first meeting with his Greek counterpart, Makis Voridis.

At the end of the meeting, which was held in a positive and warm climate, Kadis said that with the Greek Minister of Rural Development, he exchanged views on the shaping of the EU`s new Common Agricultural Policy (CAP), a subject in which, “the two countries, in most of the subjects, have similar positions.”

“At the same time,” he said, “there has been a reference to bilateral relations on issues where there is cooperation now and I have been invited by Mr Voridis to visit Cyprus.”

“The Minister immediately responded positively and is expected to visit Cyprus very soon in order to have an in-depth analysis and discussion of our bilateral relations on the issues that affect our responsibilities,” the Minister concluded.