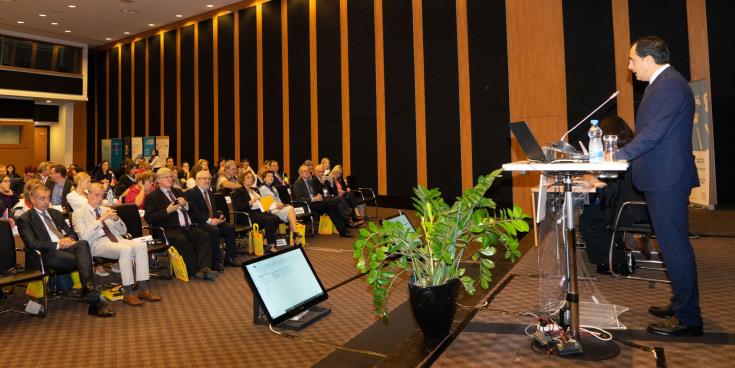 About 150 delegates from government departments, international organisations and civil society came together in Nicosia, on Friday to discuss and raise awareness on the Council of Europe’s Convention on offences relating to cultural property in a two-day conference entitled: “Act for Heritage!”.

Known as the Nicosia Convention, the treaty was adopted on May 19, 2017 and is the first international legal instrument dealing with the criminalization of the illicit trafficking of cultural property. To date, it has been signed by Armenia, Cyprus, Greece, Italy, Latvia, Montenegro, Portugal, Russia, San Marino, Slovenia, Ukraine and Mexico. It has been ratified by Cyprus and Mexico. The Convention will enter into force once a total of five states ratify it, including at least three members of the Council of Europe.

In his opening remarks, Cyprus Foreign Affairs Minister Nicos Christodoulides noted that the country “is particularly sensitive on the need to protect cultural heritage from destruction or damage and to combat the illicit trafficking of cultural heritage objects.”

“The ongoing Turkish military occupation of the northern part of Cyprus has caused severe damage to movable cultural objects, monuments and archaeological sites,” he said, adding that “our competent authorities frequently engage in efforts to repatriate stolen cultural objects from abroad and through these efforts have gained a unique practical expertise in this domain.”

Christodoulides pointed out that with a view to utilising its national experience to strengthen international efforts to protect cultural heritage globally, Cyprus has “a longstanding commitment to participate in the initiatives promoting the protection of cultural heritage in the Council of Europe, the European Union, the United Nations and other international fora.”

Referring to the Nicosia Convention he said he considers it “our most important initiative and contribution in this context.”

The Council of Europe’s Deputy Secretary General Gabriella Battaini-Dragoni in an opening address which was delivered on her behalf by Matjaz Gruden, Director of Democratic Participation of the CoE noted that the Nicosia Convention “breaks new ground” as a criminal law instrument which contributes to a coherent international legal regime by which to harmonise domestic legislation cultural property criminal offences and sets minimum standards of protection that state parties must meet “creating an effective punitive dimension at the international level.”

She referred to a joint action between the Spanish Civil Guard, Europol, Interpol and the World Customs Organisation which resulted earlier this year in the seizure of 18,000 items and the arrest of 59 people. This, Battaini-Dragoni pointed out, “was undoubtedly a positive outcome but its success in fact signposts the need to go further.” Because, she added, “the hard reality is that too few of these offences are reported, revealed and prosecuted.”

The Council of Europe’s official stressed that “the time to act is now,” adding that “we are ambitious to move forward, attract more signatures and achieve more ratifications, so that better, more effective coordinated action can take place and more crimes can be stopped.” To that extent she underlined the need for “awareness – raising and education and action from our law-enforcement bodies.” She also spoke of the need for active engagement and participation of all the actors concerned “if we are to maximise the good that we can do.”

On her part, Giuliana De Fancesco Chair of the Steering Committee for Culture, Heritage and Landscape said the Nicosia Convention “demonstrates the capability of the Council of Europe and its member states to effectively and timely address societal challenges, to work in cooperation across different sectors and involve different committees with the aim of reaching a common, good result.

In a video message, Themis Christophidou Director General for Education, Sport, Youth and Culture of the EU referred to the fact that unfortunately, many precious objects looted and illicitly excavated in third countries end up on the European market, stressing that “this practice has to end.”

She spoke of the new EU regulation on the introduction and import of cultural goods provides rules for thorough scrutiny of the imported, expressing her conviction that “it will bring its effects soon.” Referring to the Nicosia Convention she said that she sees “huge potential”, because it obliges signatories to introduce effective, proportionate and dissuasive actions and expressed the hope that all Council of Europe member states will ratify it soon.

In his opening remarks, Kunio Mikuriya, Secretary General of World Customs Organisation spoke of the cultural heritage programme the organization implements, including training and an online network to be used in cooperation between different law enforcement agencies.

He referred to obstacles the customs authorities are faced with due to the complicated nature of the subject and the long time it takes to prove that items seized are cultural heritage objects.

“What we need is support from the political level and civil society to safeguard our culture,” he noted.

In statements after the opening of the conference, Guiseppe Zaffuto spokesperson of the Council of Europe’s Deputy Secretary General, said that the Council of Europe is there “to create a common legal space for its citizens and for its member states” and spoke of the importance of such an international treaty.

We are here, Zaffuto said, “to take further steps for this Convention,” adding that it is important that there are several actors present here; the intergovernmental sector, the international sector, the art business and NGOs also stressing the role the media can play.

On his part, Foreign Affairs Ministry spokesperson Demetris Samuel, said the conference aims to further promote the universality of the Nicosia Convention.

He expressed his confidence that conference participants “will take back to their countries a strong positive message about the convention and about the need to act together to promote our shared heritage.”

The conference is organized by the Commissioner for Volunteerism and NGOs of Cyprus in cooperation with the Foreign Affairs Ministry of Cyprus, the Council of Europe and the EU.