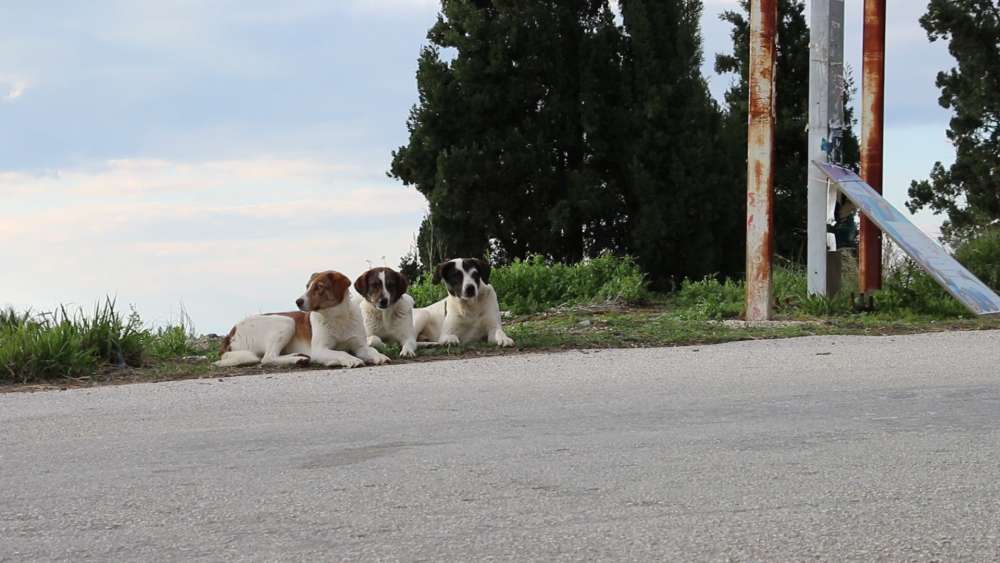 Figuring out the number of stray dogs in Cyprus is a hard task.

CSPCA claims that over 200,000 dogs are abandoned every year in the government controlled areas of Cyprus. D.O.G Rescue Cyprus says that the estimated number of abandoned dogs in Cyprus is 170,000 per year.

According to veterinary services stats, between 2014 -2016, 694 dogs were euthanised by the public service alone.

Whichever of these numbers is closest to the truth, the numbers are huge for a country of less than one million people. Many perfectly healthy dogs are abandoned each year by their owners and end up in shelters or at the pound to be euthanised.

Christina Georgiou an award winning film composer and screenwriter with a PhD in music, decided to film a documentary to raise public awareness on the issue.

“Education is the key. Sometimes, even people who love animals contribute to the stray issue without even realising, for example, by not spaying, tagging or microchipping their pets: most of the dogs on “lost and found” sites are not registered, or thrown-away litter. So, a big part of the solution rests in raising awareness,” she says.

Named “The Stray Story: A Dogumentary,” the projects spans four countries and thousands of dogs, even though it started out as a self-funded effort and its crew numbers no more than three people at a given time.

In Cyprus it shows the work of Nicos Kountouris, an air traffic controller and director of the NGO Zootropion, who through a primary school programme aims to reduce the numbers of strays and incidents of animal abuse.

It also follows, Takis Proestakis, also known as “Saint of dogs,” a former dentist who quit his job to open an animal shelter in Crete. Takis’ facebook page now has more than 270,000 likes and attracts volunteers and donations from all over the world.

In Romania, it focuses on Andreea Roseti, president of Animal Life in Sibiu and in the US it follows Norma Torres, a forensic neuropsychologist, who was the first person to introduce pet therapy within the prison system.

“Being around people who share a burning passion for helping animals and humans, experiencing the world through their eyes and realising how we are all connected, has been an unprecedented magical and profound experience, and in many ways this has become the backbone of the film,” Christina says.

She admits that these experiences have been rewarding for her but at many times working for the documentary has proven to be challenging.

“Seeing cages in pounds filled with perfectly healthy, gorgeous and well-behaved dogs on ‘death row’ is heart-breaking. None of these pure souls, collected by dog-catchers and discarded like trash, deserve such a fate. It gets even more heart-breaking knowing what’s behind it all.”

She says that in some parts of Romania, being a dog-catcher has become a profitable business as municipalities may offer up to €80 for each dog caught. In a country with millions of strays, it has become an occupation.

“It is painful to see that even dogs are victims of consumerism and greed. Experiencing the suffering of strays while filming in various countries around the globe and knowing you can’t save them all is extremely frustrating.”

Asked what in her opinion are the main causes behind animal abuse and neglect in Cyprus, Christina says that it is a mix of cultural and social reasons, education and government policy.

“Not long ago, people’s exposure to animals was built on a ‘tool’ for their own survival, and all devoid of emotional attachment. If we take dogs as an example, the general population’s exposure was limited to hunting and shepherd dogs or ‘wild’ creatures, that when their paths crossed, invariably resulted in an experience of fear on both sides. If we jump forward to today, there still exists an overriding sentiment that animals are here to serve. If you couple that with the number of strays on the island, it predicates not only fear, but also a nuisance, and the cycle perpetuates,” she says.

Much responsibility lies at the feet of the government, municipalities and the police, Christina adds. It is “their obligation to inform, educate and enforce legislation. Citizens need to understand and be guided on how to interact with and, in turn, love animals as sentient beings that should be handled responsibly, with care and respect.”

Going back to the initial question on the number of stray dogs in Cyprus, Christina says that estimates put it somewhere between 200,000 and 16,500.

“It is still a huge number of strays, considering the small size of the island, and the limited resources available to NGOs and volunteers. The work that these people do, at high emotional, personal and financial cost, is admirable. The Stray Story: a Dogumentary pays tribute to their invaluable contribution, that inspires and leads by example, towards a better world for all.”

The original idea was that the movie would be released in 2020. However, Christina says it has turned into a much larger project, as funding and assistance from volunteers grew beyond her expectations.

“What originally started out as a small, local project, ended up becoming a global documentary, which is as much about raising awareness as it is about inspiring people to join this incredible network of volunteers, who make the change they want to see in the world.”

She says that the film has taken a life of its own, developing into something much larger and more important. “This inevitably means that other sources of funding are now required, by private investors, companies and organisations.” The Stray Story team has also launched a crowdfunding campaign to finance production.

Although a lot of filming is still pending, 2020 is still in the picture, Christina says.

The aim is for the documentary to be disseminated as widely as possible around the globe. “Not only through the traditional festival and theatrical distribution routes, but also through online, VOD and SVOD platforms, TV stations, you name it. It is a documentary that must reach every household, and everyone must see!”

Call to action by Christina

The more this project grows, the more impact it will have in changing mentalities about the issue. Not everyone may be able to rescue dogs, but everyone can support this collective effort. Feel free to follow and share the film’s Facebook page (www.facebook.com/thestraystory) or visit our website (www.thestraystory.com).

It sounds simple, but it goes a long way! As Nelson Mandela put it, “education is the most powerful weapon which you can use to change the world”!

If you wish to donate for the production of the film, click here.

According to the World Health Organisation’s estimate of 2018, there are approximately 200 million stray dogs worldwide at the moment.

In the US alone, approximately 1.5 million strays are euthanised every year (and, unfortunately, death by gas chamber, though inhumane, is still common practice in some states).