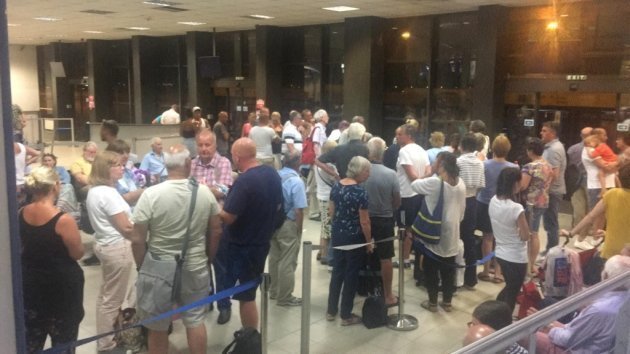 Around 200 passengers on a flight from Paphos to Norwich have been stranded in Bulgaria after their flight made an emergency landing, the Eastern Daily Press reported on Friday.

It said  the delay and lack of communication has ruined two weddings, a honeymoon and an engagement for Norwich couples due to return home.

The passengers included a wedding party of 19 people and six children. Some groups had been split up across different hotels, and were running low on milk and nappies, one of the passengers told the newspaper.

27-year-old Jack Weaver and his wife Ellie said they had been on board yesterday’s flight when, one hour after take-off from Paphos, they smelled smoke.  The flight was immediately diverted to Sofia.

A TUI spokesman said: “We would like to apologise to all customers on flight TOM5483 from Paphos to Norwich on 21st June 2018 which diverted to Sofia, Bulgaria last night due to a technical issue. All customers have been provided with meals and overnight accommodation.

“We would like to thank our customers for their patience and understanding and hope to have them on their way as soon as possible.

“We are currently assessing the issue and will update customers directly through the hotel where they will remain until we have a confirmed departure time.

“We try to share up to date information as soon as possible with customers and take all feedback on board to look at how we can make improvements in future.

“We’d like to take this opportunity to reassure everyone that the safety of our customers and crew is of paramount importance.”

By In Cyprus
Previous article
Cyprus, Israel and Greece in pledge to boost defence cooperation
Next article
Study warns over risks from offshore natural gas extraction in East Med