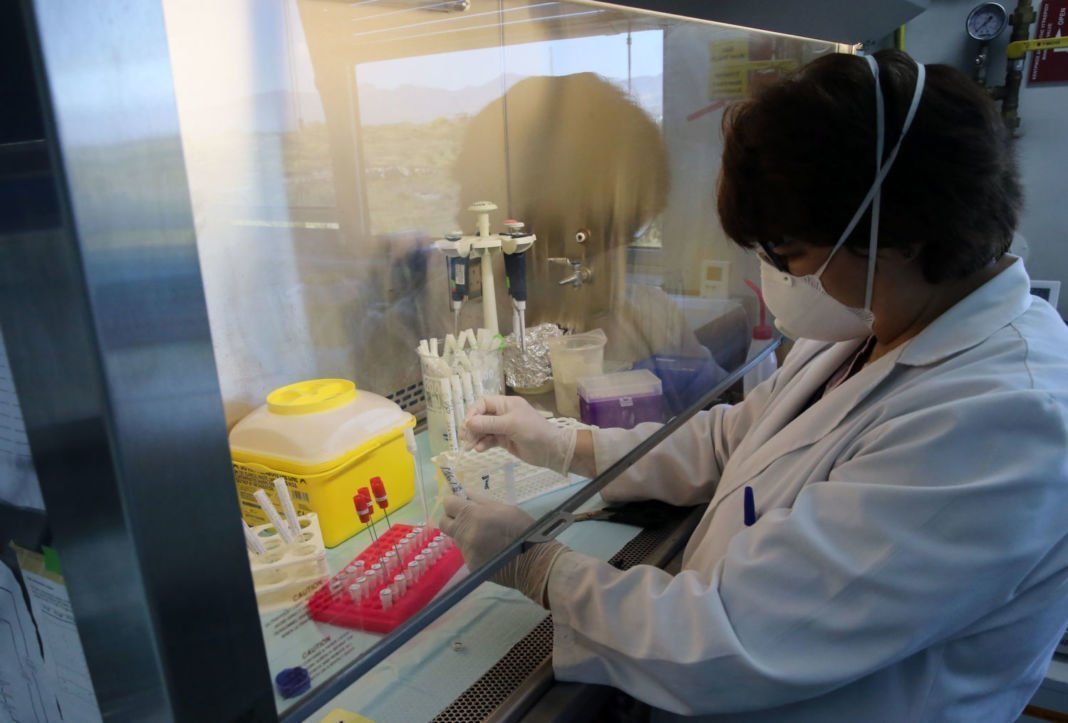 Another 20 people have tested positive for coronavirus, the Health Ministry announced on Sunday, a further decline compared to yesterday’s 30 cases.

A person has died, a man aged 76 years with underlying health conditions who had tested positive, however his death is not attributed to Covid-19.

This brings the total number of confirmed cases to 446 (including ten in the British Bases).

So far there were 14 deaths of patients found positive to Coronavirus of which nine are attributable to Covid-19, 7 men and two women with a median age at 66 years.

Dr Leontios Kostrikis said that 317 of the 446 confirmed cases are from contact with other people found positive to Coronavirus.

10,946 tests have been conducted so far by CING, the microbiology departments of Okypy hospitals and by private labs.

37 people have so far been cured from the virus.

Paphos sample-taking continues and will conclude on Tuesday.

Dr Leontios Kostrikis said that the progressive reduction in recent days fills experts with optimism as to the effectiveness of lockdown measures, but noted that scientifically it is too early to jump to conclusions.

Last Wednesday there were 58 confirmed cases, the most cases in a single day recorded so far. On Thursday there were 36, on Friday 40 and yesterday 30.

He added that the method of tracing works well globally and especially in Cyprus due to its small size but warned that many who tested positive withhold information on their recent contacts, complicating the tracing process.

“In doing so, they put their loved ones and friends at risk. We request that they provide us with all necessary information in order to make the painstaking tracing process meaningful,” he said.

Kostrikis concluded by thanking the public for their efforts. “Without your sacrifices we would not have these encouraging numbers. We call on you to continue with the same determination to adhere to the measures.

“The situation is under control, but unfortunately it is also volatile. Please stay at home and keep your distance,” he said.

Dr Marios Loizou said that until 3 pm on Sunday, 36 people with Coronavirus were being treated at Famagusta referral hospital, of whom four in the special care unit. Four people were also discharged.

11 people are intubated in ICUs in a stable but critical condition; 3 at Limassol hospital and 8 at Nicosia hospital.

8 Coronavirus-positive patients are also being treated in a stable condition in special wards in hospitals other than the Famagusta referral hospital.

Loizou reminded that it is paramount to keep cases low so that the health system can cope.

A study presented by experts on Thursday showed that 30% of cases required hospitalisation, of which 17% underwent treatment in ICUs.

Loizou said that based on the same study, the mortality rate in Cyprus against confirmed cases stands at approximately 2%.

“These figures are satisfactory so far and below the global average, and we aim to make them even better.

“For every day we gain, the medical staff is allowed to adjust and train to respond to the needs of Covid-19 patients.

“By adhering to measures, by staying home and maintaining distances, we reduce the number of cases, thereby giving doctors a chance to continue to do their jobs properly,” he said.

Asked to explain how the ‘Iris’ software for properly recording Coronavirus deaths works, Loizou said that it’s not something new but is used by the Health Ministry’s Epidemiological Surveillance Unit since 2013.

“This is an automated system that codifies multiple death causes and is used to select a patient’s final underlying cause of death. It is based on the international WHO death certificate, and the causes of death are codified as per ICD10 regulations.

“Iris’ users enter the illnesses onto the software exactly as recorded on the medical death certificate, without changing the order or the wording of the illnesses. The software then using ICD 10 codes and international regulations generates the multiple causes of death and the final cause of death.