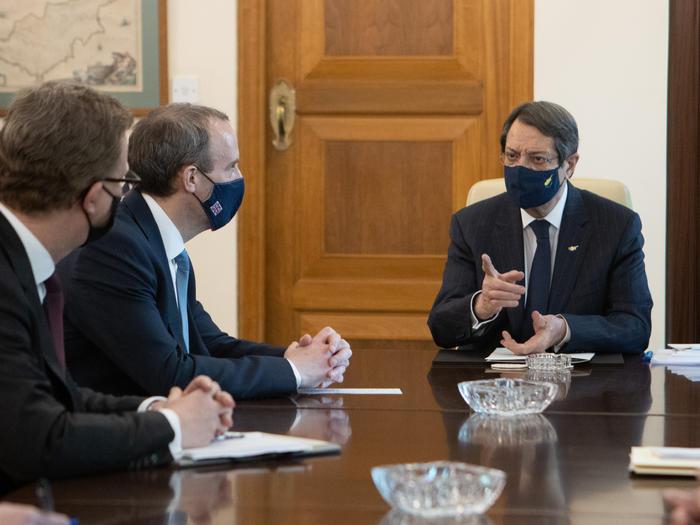 British Foreign Secretary Dominic Raab called for flexibility ahead of a fresh bid by the United Nations to heal the decades-old division of Cyprus, a dispute harming ties between Turkey and Greece and energy projects in the eastern Mediterranean.

Raab represents one of three guarantor countries under a convoluted treaty which granted Cyprus independence in 1960.

He and the foreign ministers of Greece and Turkey are expected to attend a three-day summit the United Nations will call in early March on the future of Cypriot reunification talks.

Raab was holding talks on the island on Thursday with its Greek and Turkish Cypriot leaders. Earlier in the week he spoke to his counterparts from Greece and Turkey.

“Ahead of informal UN talks on Cyprus, today I spoke to Turkish Foreign Minister Mevlut Cavusoglu and reinforced the need for all sides to be flexible,” Raab wrote on his official Twitter account late Wednesday.

Cyprus, with a combined population of just over 1 million, was split in a Turkish invasion in 1974 triggered by a brief Greek-inspired coup.

The conflict is thrown into sharper focus by Ankara’s attempts to join the European Union and to tap energy resources around the island.

By extension, the dispute spills over to separate disputes between Greece and Turkey over their own maritime borders.

Cyprus talks have repeatedly stumbled over complex issues such as future co-governance or the demarcation of boundaries between the two sides, now split by a 180 km ceasefire line patrolled by United Nations peacekeepers.

The last attempt collapsed in disarray in mid-2017.