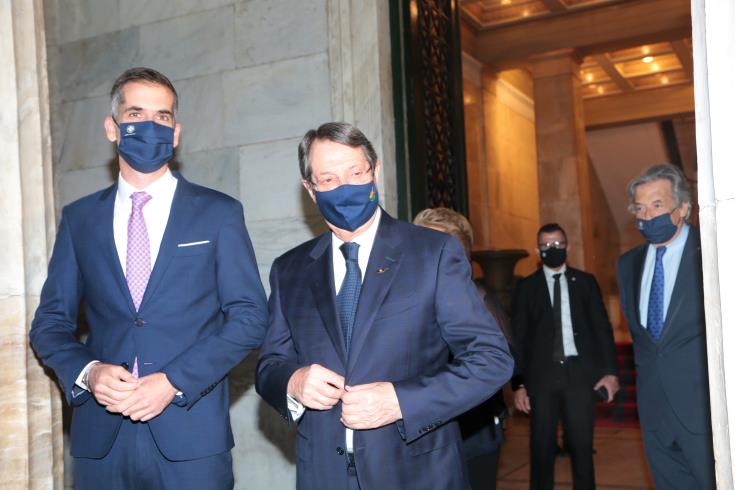 Cyprus President Nicos Anastasiades has reiterated the unwavering commitment of his government to a solution of the Cyprus problem based on UN resolutions, the European acquis, and Europe’s principles and values.

Addressing on Monday evening an award ceremony, during which he received the Gold Medal of Honour of the city of Athens, Anastasiades also said that his government’s goal is to create a genuinely independent and modern reunited state.

One whose sovereignty, territorial integrity, and constitutional order would not be restricted by the anachronistic system of third-party guarantees and by the presence of occupation troops, he added.

Cyprus is divided since a 1974 invasion by Turkey which still maintains troops in the breakaway northern part where Turkish Cypriot have declared a secessionist entity. Only Ankara recognises the breakaway ‘state’ there.

“The Cyprus problem must ensure the functionality and viability of the state, allowing all citizens, regardless of their ethnic origin, to coexist in a spirit of mutual respect and to co-create in peace, stability, security, and progress,” Anastasiades said.

“As the President of a semi-occupied country, which represents the only European state where a dividing line exists within its territory, this duty requires as an ultimate priority the reunification of my country and its extrication from the occupation troops,” he added.

He also stressed that Greece and Cyprus are currently facing crucial challenges due to Turkey’s escalating provocations in the Aegean, the Cyprus’ Exclusive Economic Zone (ΕΕΖ), and recently in the fenced off part of Turkish occupied Famagusta, known as Varosha, with the opening of part of its beach front.

“Greece and Cyprus are neither threatening nor seeking to usurp other states’ rights. Instead, they respect international law and pursue creative dialogue”, Anastasiades noted, while adding that if an agreement with Turkey is not reached the International Court could give its ruling.

“We will never succumb to threats, intimidation, and provocations, which violate international law and the good neighbourly relations of modern states,” he concluded, also stressing that he will continue to tirelessly work to live up to the honour of having been awarded this medal.
(CNA)