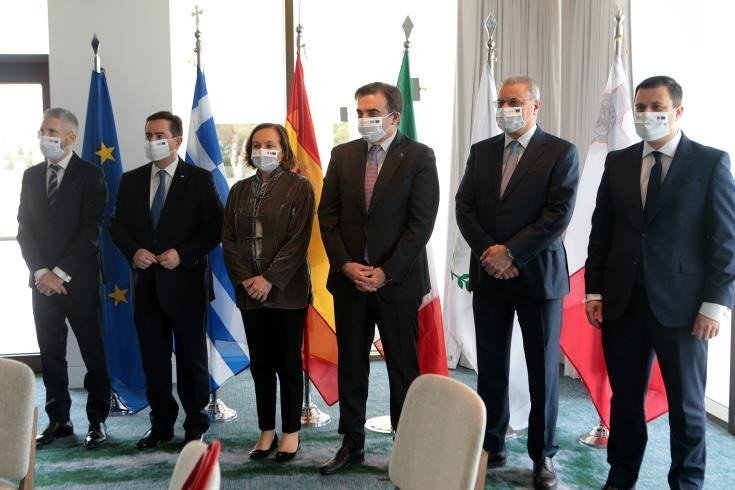 Ministers of Interior and Migration of Cyprus, Greece, Spain, Malta, and Italy, participated on Saturday at the Med-5 Ministerial Conference, in Athens and agreed to form a united negotiating approach as regards the new European Pact on Immigration and Asylum.

Speaking at the Conference, Cypriot Minister of Interior Nicos Nouris underlined that for the fourth subsequent year Cyprus is the European state with the most asylum seekers applications in proportion to its population.

The Minister said that the asylum seekers constitute the 4% of the population of the island , adding that a large number of immigrants arrive through the green line and the occupied areas of Cyprus.

Nouris spoke of “an organized and systematic Turkish provocative behavior”,calling on the EU to address decisively this behavior during the upcoming European Council.

Interior Minister of Cyprus also noted that the new European Pact on Immigration and Asylum must “correct the mistakes of the past, creating a really just and effective new system”. As he said, the first-line states “remain engaged to their obligations as guardians of the EU borders”, but “the immigration issue must be managed centrally”.

“Besides our obligations to optimally organize our services and infrastructure, the new Pact should include provisions for central negotiation between the European Commission and African and Middle Eastern states, as well as with Asian countries –such as India, Pakistan, and Bangladesh– to succeed agreements for the return and resettlement of their citizens”, Nouris said.

“At the same time, Turkey ought to carry out its obligations according to EU-Turkey statement of 2016. Especially for Cyprus, Turkey ought to cooperate and accept Frontex’s supervision of its southern coasts, from where many boats with illegal immigrants depart daily”, the Minister noted.