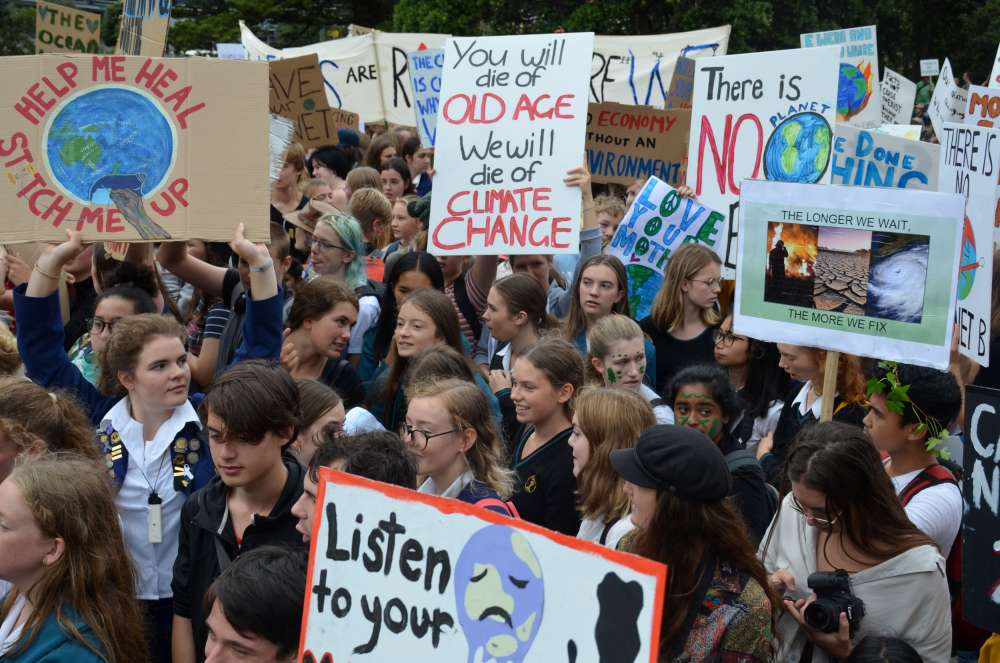 Thousands of school students walked out of classes across Australia and New Zealand on Friday in a global student strike to protest against government inaction on climate change.

“Climate change is worse than Voldemort,” read a handmade sign carried by one student in Wellington, referring to the evil wizard in the hugely popular Harry Potter books and films.

“The oceans are rising, so are we,” read another in Sydney.

Student protests in capitals and cities from Wellington to Melbourne and Sydney drew tens of thousands of people, with more demonstrations planned later in the day in Asia, Europe and the United States.

The worldwide student strike movement started in August 2018, when 16-year-old Swedish climate activist Greta Thunberg began protesting outside her parliament on school days. She has since been nominated for the Nobel Peace Prize.

“If we don’t do something, it’ll be our lives affected, not the 60-year-old politicians,” said Sydney student Callum Frith, 15, who was wearing his school uniform. “We need action.”

Elsewhere in Asia, about 60 students protested at government house in the Thai capital of Bangkok, holding cardboard signs to campaign against plastic. Thailand is one of the world’s top marine plastic polluters.

“As youths who will inherit the land, we gather here to demand that the government work with us to solve these problems,” said 17-year-old Thiti Usanakul, of student-led group Grin Green International.

The group was later invited to meet officials at the Ministry of Natural Resources and Environment in two weeks.

In the South Korean capital of Seoul, more than 100 students held recycled cardboard signs with slogans such as “Too Warm 4 School,” and “Don’t deny climate change”.

“I think environmental education should be mandatory from elementary school,” said 15-year-old high school student Bang Tae-ryung. “Although we learn, we should know more about why it’s happening and how we can resolve the problem.”

“The government just needs to change some things, which is why, if we go on strike on a school day, then they’ll notice and they might actually do something,” said 14-year-old New Zealand student Inese, who did not want her full name used.

New Zealand Prime Minister Jacinda Ardern, who has pledged NZ$100 million ($68 million) to cut greenhouse gas emissions, supports the strikes, saying teenagers should not wait for voting age to use their voices.

That contrasts with politicians in Australia and Britain who have rebuked them for cutting class.

“For action on issues that they think is important, they should do that after school or on weekends,” Dan Tehan, Australia‘s education minister, told reporters ahead of protests in Melbourne.

Wellington parent Alex, who marched beside his 11-year-old son, disagreed. “It’s a much better day of education,” he said. “This is the greatest issue of our time.”

By In Cyprus
Previous articleWhich roads will be closed during the Paphos marathon?
Next articleCabinet approves tough penalties for traffic offences