With one day to go, Trump casts doubt on integrity of prolonged vote count 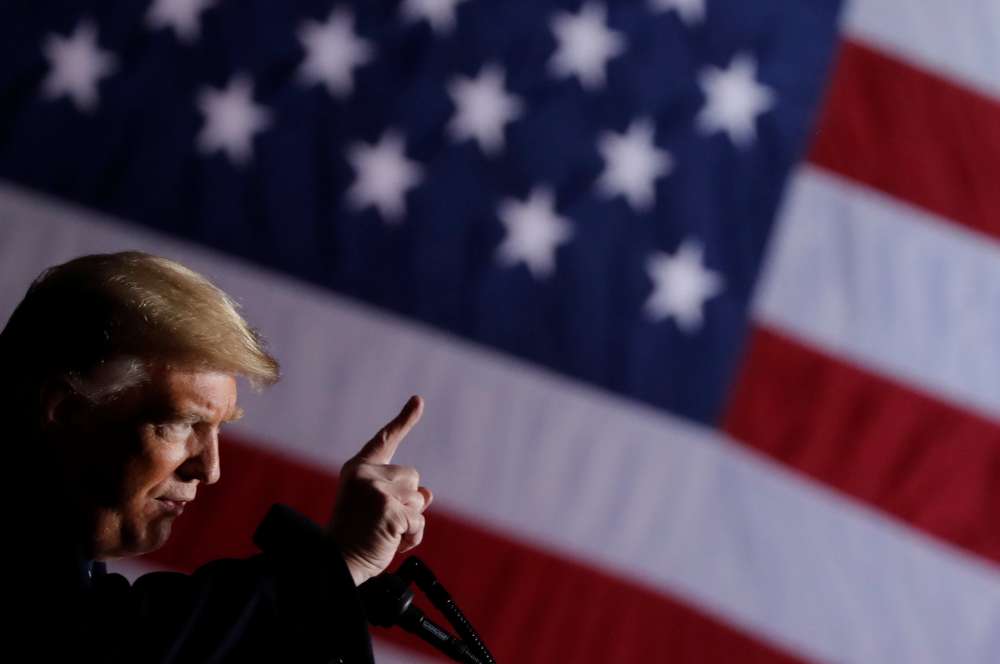 President Donald Trump has cast doubt on the integrity of the U.S. election again, saying a vote count that stretched past Election Day would be a “terrible thing” and suggesting his lawyers might get involved.

With one day to go until Tuesday’s election and trailing Democratic rival Joe Biden in opinion polls, Trump raced through battleground states in a late hunt for support, while Biden implored attendees at two rallies in the pivotal state of Pennsylvania to get out and vote.

Americans have rushed to vote early, already casting nearly 60 million mail-in ballots that could take days or weeks to be counted in some states – meaning a winner might not be declared in the hours after polls close on Tuesday night.

“I don’t think it’s fair that we have to wait for a long period of time after the election,” Trump told reporters before a rally in North Carolina. Some states, including Pennsylvania, do not start processing mail-in votes until Election Day, slowing the process.

Trump has said repeatedly without evidence that mail-in votes are prone to fraud, although election experts say that is rare in U.S. elections. Mail voting is a long-standing feature of American elections, and about one in four ballots was cast that way in 2016.

Democrats have pushed mail-in voting as a safe way to cast a ballot during the coronavirus pandemic, while Trump and Republicans are counting on a big Election Day in-person turnout.

“We’re going in the night of – as soon as the election is over – we’re going in with our lawyers,” Trump told reporters without offering further explanation.

Trump denied an Axios report that he has told confidants he will declare victory on Tuesday night if it looks like he is ahead, even if the Electoral College outcome is unclear. But he said it was a “terrible thing” that ballots would be counted after Election Day.

Asked about the Axios report, Biden told reporters between campaign stops in Philadelphia: “The president’s not going to steal this election.”

But the race is seen as close in enough battleground states that Trump still could achieve the 270 votes needed to win in the state-by-state Electoral College that determines the victor. Trump held rallies in Michigan, Iowa, North Carolina and Georgia, and planned a late one in Florida.

Biden, the former vice president, made several appearances in closely contested Pennsylvania, the state where he was born and one that is crucial to his quest for the White House.

“There is nothing he can do to stop this nation from voting,” Biden told a drive-in rally in a parking lot outside a Philadelphia church, where supporters honked their car horns in approval.

“He knows that if you get to have your say, he doesn’t stand a chance. But the American people will not be silenced,” Biden said.

Trump, buffeted by snow flurries in Washington, Michigan, a town north of Detroit, wore his trademark red cap emblazoned with the words “Make America Great Again” as he promised a boisterous crowd he would lead a recovery from the pandemic, which has killed more than 230,000 Americans and hammered the economy.

“I’m delivering the great American comeback, and we’re not having any lockdowns,” Trump promised.

Biden criticized Trump for encouraging his supporters after they harassed a Biden campaign bus in Texas. A caravan of vehicles bearing Trump campaign flags surrounded the bus carrying campaign staff on a highway on Friday, forcing the campaign to cancel two events.

Trump on Saturday retweeted a video of the incident and wrote: “I LOVE TEXAS!” In Michigan, he asked supporters if they had seen videos of “our people” with the bus.

The FBI said on Sunday it had opened an inquiry into the Texas incident. The president later criticized the investigation, tweeting: “In my opinion, these patriots did nothing wrong.”

Biden is ahead 51% to 43% nationally in the latest Reuters/Ipsos poll, taken Oct 27-29. The race remains a toss-up in Florida, North Carolina and Arizona, Reuters/Ipsos polls showed, as Trump trails by 7 percentage points in Pennsylvania and 10 points in Michigan and Wisconsin.

In his 2016 victory over Democrat Hillary Clinton, the real estate developer and reality TV personality-turned-politician was propelled into the White House by victories in Pennsylvania, Wisconsin and Michigan, states that for decades had gone into the Democratic column.

A record-setting 92.2 million early votes have been cast either in-person or by mail, according to the U.S. Elections Project, representing about 40% of eligible voters.

The early surge has led Michael McDonald of the University of Florida, who administers the project, to predict a turnout rate of about 65% of eligible voters, the highest since 1908.