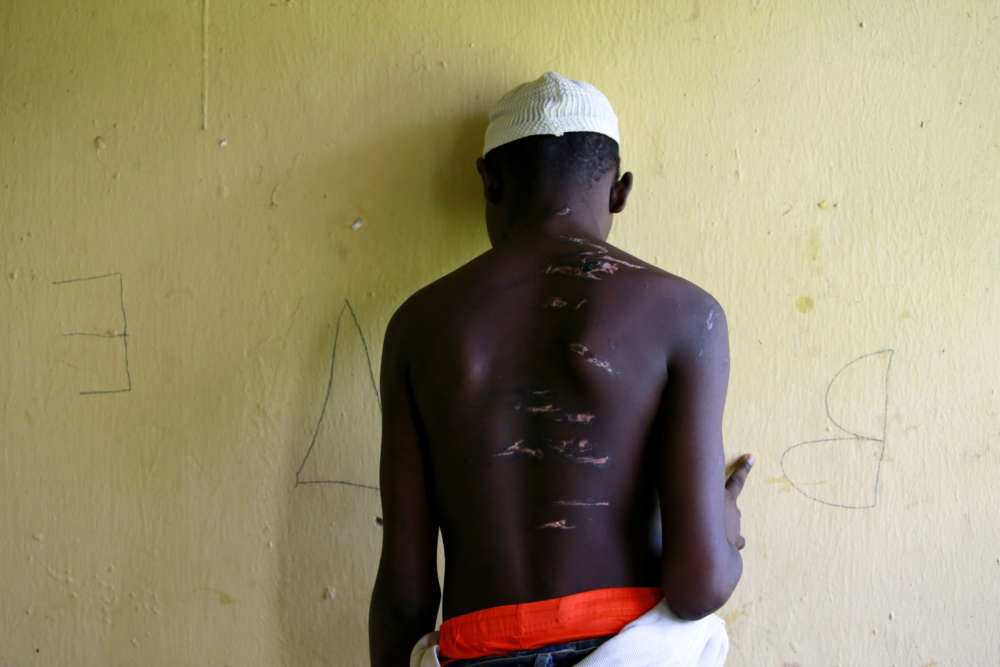 When Jibril had tried to escape as a boy from an institution in Nigeria that called itself a place of Islamic teachings, he said he was hung up by his arms until bones in his shoulders broke.

Another teenager, one of about 400 men and boys freed in Thursday’s police raid, said boys were often kept in chains and those caught stealing food were whipped until they bled.

“They used car engine belts and electrical cables to flog us,” 15-year-old Suleiman told Reuters, staring at the floor. “Teachers used to sexually harass us … They tried to loosen my pants once but I fought them off and was beaten.”

Horror stories are emerging about life in a two-storey house in Nigeria’s northern city of Kaduna as the authorities try to find families of the victims who often spent years at the site.

Police arrested seven adults in the raid on the building, which had a sign in Arabic at the entrance declaring itself “House of Imam Ahmad Bin Hanbal for the Application of Islamic Teachings”.

Some parents paid fees, believing it was an Islamic school. Some described it as a good institution and dismissed talk of abuse. Others saw it as a correctional facility. Police and regional officials said it was not registered as either.

Despite mixed accounts about its role, the abuse reported by victims has thrown a spotlight on Nigeria’s struggle to provide enough school places for its rapidly expanding population, leaving a gap for unregulated institutions that poor parents sometimes turn to.

The West African nation’s population will swell from 190 million to 400 million by 2050, according to U.N. figures. Primary education is officially free but about 10.5 million Nigerian children aged five to 14 are not in school.

“The long-term viability of the Nigerian economy – and the state itself – hinges on the government, religious, and traditional institutions developing a plan to address this challenge before it becomes impossible to remedy,” he said.

Prior to Thursday’s police raid, those who made it out of the Kaduna institution were sometimes returned by families. Some parents said they needed to discipline wayward children and others said they were too poor to look after all their kids.

Kaduna state government said there were at least 77 boys under 18 years old held there. The youngest was five.

Reuters spoke with seven victims and five parents of those who had been inside, withholding their full names to protect their privacy.

All the victims said beatings were regular and said children and men were frequently shackled. Days were dark, long and hungry: food was only served at 10 a.m. and 11 p.m.

Suleiman’s elder brother sent him to the institution five months ago for skipping school. He was signed up to board while he studied Arabic and Islam’s holy book, the Quran.

“They beat us everywhere in the house, even in the mosque. If you asked to speak with your family, they would shackle you,” said the 15-year-old, who showed sores, scabs and scars on back. When Suleiman and three friends were caught trying to steal some garri – a staple food made from cassava shavings – they were stripped and whipped, he said.

“When the police raided the school the whole place was in pandemonium, we were so happy,” he said. “What I want now is to return home. I’ll be a good boy.”

Jibril, now 17 and who was hung up for trying to escape when he was 10, said boys faced a stark choice: submit to regular sexual assault or be beaten. Jibril chose beatings.

“The teachers and prefects raped boys. Those who were sexually molested were enticed with canned fish. Those of us who refused were caned,” he said, blaming a scar beside his left eye on a caning. “They used planks of wood to beat us.”

He now struggles to raise his arms since his punishment for trying to escape. He was sent home for six months after that incident. His family returned him when he had healed.

Jibril and Suleiman are now in a safehouse on the edge of Kaduna while the authorities try to find their relatives. Their temporary home is filled with laughter as boys and teenagers, up to 17 years old, play together. Those adults who were freed are staying in a neighbouring building.

At the Kaduna institution, relatives were not allowed to see boys for three months after admission and had limited visiting rights after that, parents and children said. Punishment was swift for those who talked of any abuse, boys said.

“If anyone tried to tell their family, they would be hung up from a wall or put in chains,” said 14-year-old Umar, whose grandfather sent him to the facility two years ago for skipping school.

About 40 police officers finally raided the building, acting on a complaint by an uncle who was denied access to his nephews.

Police said they found several boys and men in chains. Reuters filmed victims in chains on Thursday after the raid. Some boys said they were shackled to broken power generators, which they dragged around, including to bed or the bathroom.

Police said they expected to charge seven people, who they said ran the institution, over physical and sexual abuse allegations. Those arrested could not be reached for comment.

The building lies in Rigasa, a rundown Muslim district of Kaduna, a city that, like Nigeria, is evenly split between Muslims and Christians.

Children begged in the traffic on the streets outside.

President Muhammadu Buhari, a Muslim, has sought to encourage school attendance, with programmes that include one offering free school meals that the government says reaches 9.8 million children in 32 of Nigeria’s 36 states.

But Nigeria, an oil producing state whose finances by the government’s admission have been drained by corruption, only spends 0.5% of gross domestic product on health and 1.7% on education, among the lowest worldwide, the International Monetary Fund said.

With few options, some parents defended the Kaduna institution, which charged fees of 35,000 naira ($114) a term.

“There is no problem in this school,” said a woman who only gave her name as Zainab, wearing a Muslim veil and speaking outside the locked gates. She said she had seven children at the institution where she cooked meals and had not seen any abuse.

Ahmed Balrabe, a tailor who lives next to the site, said two of his children attended the school and he had never encountered any abuse. “It was good for them, they became calm,” he said. “They showed them how to read the Quran. I liked it.”

By In Cyprus
Previous articleNature is not a dumpster, Environment Commissioner tells CNA
Next articleDefence Ministers of Greece and Serbia at military parade marking Cyprus Independence Day