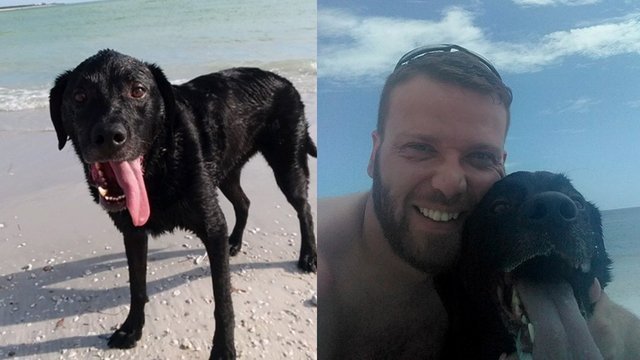 A US vet in Tampa has issued a warning to pet owners after a dog accidentally died from saltwater poisoning.

Chris Taylor  told Fox 13 TV station he had no idea a swim at the beach with his dog would put his black lab in the hospital, but as the vet explains, dogs can easily get salt water confused for fresh water.

The six-year-old black lab, O.G. died accidentally after swallowing too much salt water at the beach.

“Towards the end of the evening, he was obviously tired and little wobbly after a long day at the beach,” Taylor said. “We took him to the car. He had a little bit of diarrhea he didn’t feel that well.”

That was Monday. The next day, Taylor says O.G. seemed to be feeling better but by Wednesday he stopped eating and even stopped responding when Taylor would call his name.

He rushed him to the animal hospital but, shortly after arriving, O.G.’s brain started swelling. O.G.’s body stopped responding to the medicine.

Taylor says he was forced to put his loyal companion down.

“When I brought my puppy to the beach for the first time, I was literally there for only 10 minutes,” Dr. Webster said. “He was drinking it like it was water in the pool. So for him, 10 minutes was more than enough.”

“Even though we had fresh water and he was drinking that and we took breaks,” Taylor said. “Accidents can still happen.”

Dr. Webster says next time you take your dog to the beach, make sure you have plenty of fresh water. If your dog starts to experience diarrhea or vomiting, it could be a sign of saltwater poisoning.

If that happens, be sure to call your vet as soon as possible.