Vandals desecrate 90 Jewish graves in east France ahead of marches 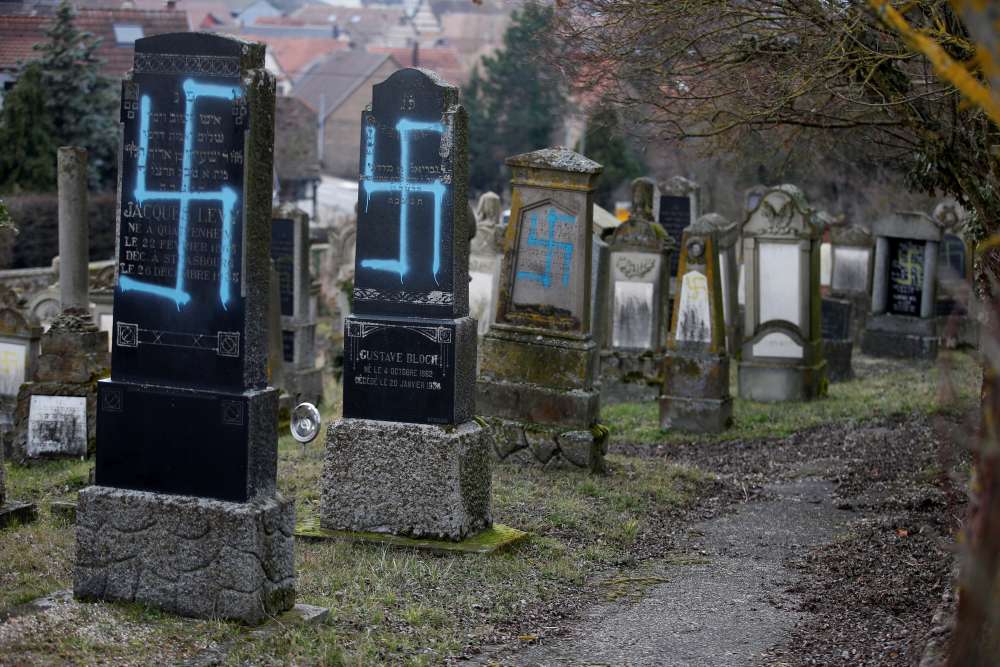 Vandals have daubed swastikas and anti-Semitic slogans on around 90 graves in a Jewish cemetery in eastern France, local officials said on Tuesday, shortly before planned marches nationwide against a rise in anti-Semitic attacks.

French President Emmanuel Macron visited the cemetery on Tuesday in the village of Quatzenheim, near the city of Strasbourg, following the overnight desecration, walking through a gate daubed with a swastika as he entered the graveyard.

“It’s important for me to be here with you today,” a solemn looking Macron told local leaders and members of the Jewish community after paying respects at one of the desecrated graves.

Many French political leaders, though not Macron himself, are due to join Tuesday evening’s march in Paris against anti-Semitism, which remains a scourge in France.

Figures released last week showed there were more than 500 anti-Semitic attacks in 2018, a 74 percent increase from 2017.

Among incidents in recent days, ‘yellow vest’ protesters were filmed hurling abuse at Alain Finkielkraut, a well-known Jewish writer and son of a Holocaust survivor, on Saturday.

France is home to the biggest Jewish community in Europe — around 550,000 — a population that has grown by about half since World War Two, but anti-Semitic attacks remain common.

A rabbi and three children were killed at a Jewish school in Toulouse in 2012 by an Islamist gunman, and in 2015 four Jews at a kosher supermarket in Paris were among 17 people killed in the city by Islamist militants.

This month, artwork on two Paris post boxes showing the image of Simone Veil, a Holocaust survivor and former magistrate, was defaced with swastikas, while a bagel shop was sprayed with the word “Juden”, German for Jews, in yellow letters.

“We need to educate and remind people about our history, to talk about the horrors that hide behind those criminal acts. We also need to punish (more) and we know that we can’t be hesitant on that.”

Macron will host a dinner on Wednesday with the head of Crif, the umbrella body that represents the Jewish community in France.