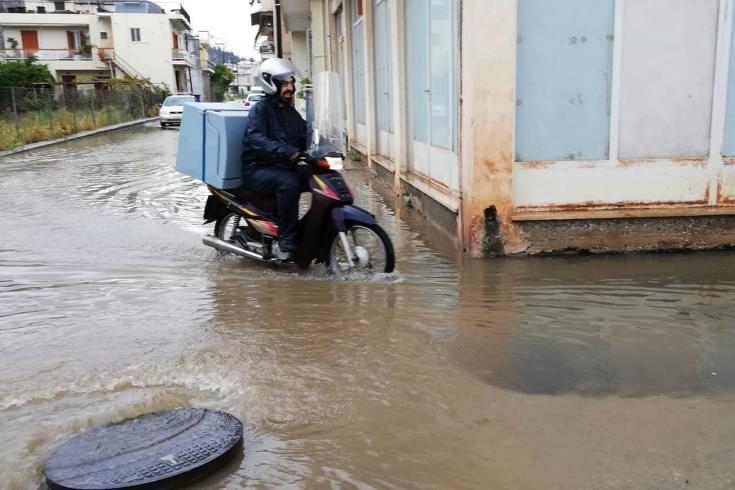 One person has died and three are missing in Greece  after swirling winds and torrential rain brought flash floods in several parts of the country.

The man who died suffered a heart attack after he was trapped in his car because of the extreme weather conditions.

But on Monday morning, rescuers found one of  four missing  people. The 27 year old was found safe, in the Mantoudiou area of Evia, quite a distance from where his car had been found abandoned.

Three others, including a couple, are still missing.

The storm — named Zorbas — has left behind a trail of destruction in the Peloponese,  mainland Greece and Evia.

Fierce storms are expected in the next few days in islands of the north and east Aegean.

The rare type of tropical storm known as a Medicane began on Saturday.

Firefighters  received hundreds of calls for assistance to help evacuate people trapped in cars and flooded homes and to remove downed trees and other debris.

TV images showed flooded streets turned into rivers in the wider area of Corinth in the Peloponnese and massive sea waves crashing into the shores of coastal towns in the region.

“The Peloponnese is holding on despite the impact and the side effects of this extreme weather phenomenon,” said regional governor Petros Tatoulis, adding that homes, fields and state infrastructure had suffered damage.

Temperatures plunged unexpectedly by up to 10 degrees Celsius this week. Wind speeds topped 100 km (56 miles) per hour in several areas and were forecast to intensify.

By In Cyprus
Previous article
Exhibition ‘Duality’
Next article
Indonesia rushes in aid as death toll from quake, tsunami passes 840