UPDATE-India loses contact with spacecraft on mission to the moon 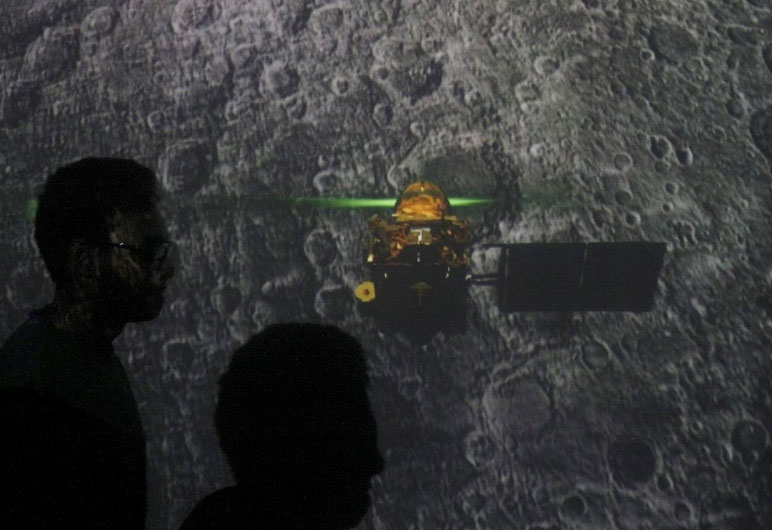 India lost contact with a spacecraft it was trying to land on the moon on Saturday, its space agency said, in a setback for the nation’s ambitious plans to become the first country to probe the unexplored lunar south pole.

The lander of the Chandrayaan-2 moon mission was attempting a “soft,” or controlled, landing near the south pole of the moon where scientists believe there could be water ice. Communication was lost just as it was about to touch down.

The Indian designed spacecraft, which had been orbiting the moon, began descending to the lunar surface at about 2007 GMT but scientists lost contact with it during the penultimate stage of the descent.

For a graphic on the spacecraft’s planned landing sequence, click https://tmsnrt.rs/2MVmBPn

A live broadcast from ISRO, India’s equivalent of NASA, showed scientists grow tense and the floor fall silent as the control station struggled to get a signal from the lander.

“There are ups and downs in life … What you have accomplished is no small achievement,” Prime Minister Narendra Modi, who was present at the ISRO centre, told scientists after being briefed by Sivan.

ISRO has not commented further, but Modi hinted in an address to the nation that the lander might have travelled at a higher-than-expected speed and crash landed on the moon.

“If historians some day write about today’s incident, they will certainly say that inspired by our romantic description of the moon throughout life, Chandrayaan, in the last leg of the journey, rushed to embrace the moon,” he said.

“I can proudly say that the effort was worth it and so was the journey,” Modi added.

In an emotional moment broadcast on TV channels, Modi embraced and consoled a visibly heart-broken Sivan.

“We are full of confidence that when it comes to our space program, the best is yet to come,” Modi said.

Sivan had earlier described the final moments of the landing mission as “15 minutes of terror,” due to the complexities involved with lunar gravity, terrain and dust.

Only the United States, Russia and China have landed on the moon. Beijing’s Chang’e-4 probe touched down on the far side this year, while Israel made an unsuccessful attempt to land its Beresheet spacecraft on the moon in April.

The south pole is believed to contain water as craters in the region are largely unaffected by the high temperatures of the sun. ISRO had hoped to confirm the presence of water in the form of ice, first detected on its mission in 2008.

Experts said the lander and rover were only a part of the moon mission and Chandrayaan-2’s orbiter was still orbiting the moon and will collect and send back valuable data for one year.

Mukund Rao, chief executive of the Centre for Spatial Analytics and Advanced GIS, said there may have been gaps in planning the moon landing.

“They have to go back to the drawing board and try it once again,” said Rao, a senior ISRO scientist for 24 years who later joined private and non-government space projects.

He said scientists need a deeper understanding of aspects such as braking and thrusting mechanisms, as well as the terrain of the moon. It was important to analyse the data and find out what happened, Rao said.

India has further ambitions in space.