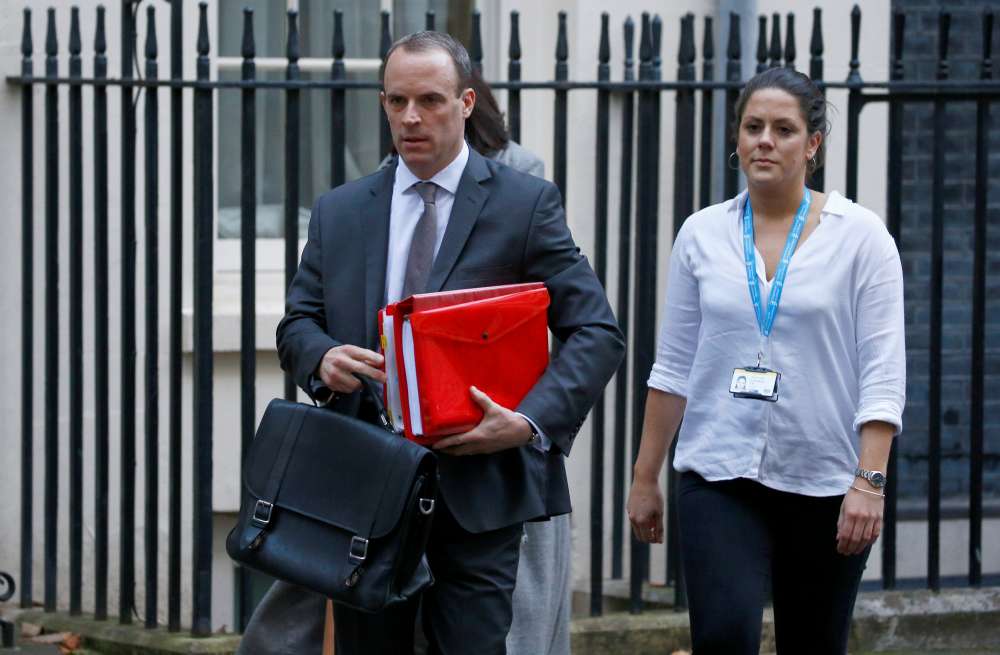 May won the backing of her senior ministers for a draft European Union divorce deal on Wednesday, but media reports of the five hour meeting were clear her team were deeply divided over the proposals.

“I regret to say that, following the Cabinet meeting yesterday on the Brexit deal, I must resign,” he said in a statement on Twitter.

Raab said May’s plan threatened the integrity of the United Kingdom and he could not support an indefinite backstop arrangement where the EU held a veto over Britain’s ability to exit.

“No democratic nation has ever signed up to be bound by such an extensive regime, imposed externally without any democratic control over the laws to be applied, nor the ability to decide to exit the arrangement,” he said in his resignation letter.

Raab said that taking that arrangement as the starting point for negotiating Britain’s future relationship with the EU would “severely prejudice the second phase of negotiations against the UK.”

Today, I have resigned as Brexit Secretary. I cannot in good conscience support the terms proposed for our deal with the EU. Here is my letter to the PM explaining my reasons, and my enduring respect for her. pic.twitter.com/tf5CUZnnUz

The 44-year-old was appointed to the role of Brexit minister in July this year following the resignation of his predecessor David Davis, who also quit in protest at May’s Brexit strategy.

“The deal you put before the Cabinet yesterday does not honour the result of the referendum”, McVey wrote in a letter to May, joining Brexit Secretary Dominic Raab in quitting over May’s draft Brexit deal.

May gained collective but not unanimous approval for her Brexit plan from senior ministers on Wednesday, and McVey said that the withdrawal agreement was not what Britons voted for when they chose to leave the European Union in 2016.

“It will be no good trying to pretend to (Britons) that this deal honours the result of the referendum when it is obvious to everyone it doesn’t,” she wrote.

“The proposals put before Cabinet, which will soon be judged by the entire country, means handing over around 39 billion pounds to the EU without anything in return… We have gone from no deal is better than a bad deal, to any deal is better than no deal.”

Earlier this morning I informed the Prime Minister I was resigning from her Cabinet pic.twitter.com/ZeBkL5n2xH

The resignations of the senior ministers thrust the United Kingdom into a political crisis just as May was attempting to garner support for a Brexit deal which her opponents have warned could sink her premiership.

He is the first member of May’s government to resign since she won the backing of her senior ministers for her draft Brexit deal with the European Union on Wednesday, a deal which has so far been mauled by opponents.

With much sadness and regret I have submitted my letter of resignation as a Northern Ireland Minister to the Prime Minister. A copy of my letter is attached.
It has been a joy and privilege to serve in the Northern Ireland Office and I will always cherish the fondest memories. pic.twitter.com/SN8j4OwhYD

Vara criticised her deal in his resignation letter, saying that it left the UK “in a half-way house with no time limit on when we will finally be a sovereign nation”.

Vara said he could not support the draft agreement.

“We are a proud nation and it is a sad day when we are reduced to obeying rules made by other countries who have shown they do not have our best interests at heart. We can and must do better than this,” he said.

It is with deep regret and after reflection that I have had to tender my resignation today as a Brexit Minister. Thank you for the opportunity. I look forward to working to support Brexit from the Backbenches. This has not been an easy decision. pic.twitter.com/C0kply8aLE