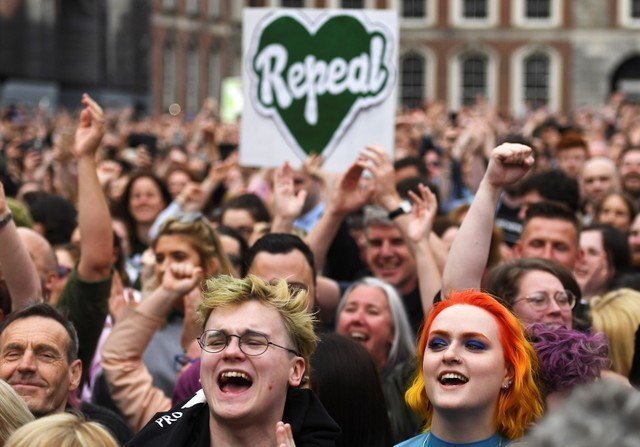 Britain‘s Supreme Court expressed the view on Thursday that Northern Ireland’s strict abortion law was incompatible with the European Convention on Human Rights, but added it did not have the powers to make a formal declaration that the law should be changed.

British-ruled Northern Ireland is left as the only part of Britain or Ireland with such a restrictive regime, after voters in the Irish republic backed the removal of a ban in a landslide vote last month that sparked calls for change in the North.

Abortion rights activists called the court‘s ruling on the law’s incompatibility a “landmark decision” that would put pressure on the British government to act, while anti-abortion groups emphasised there was no requirement to do so.

Four out of seven Supreme Court justices who considered the issue found that the North’s current law, which bans abortion except when a mother’s life is at risk, was incompatible with the European Convention on Human Rights.

However, a different four of the seven ruled that the Northern Ireland Human Rights Commission, which had initiated legal proceedings to try to liberalise the law, did not have the right to bring the case.

“As such, the court does not have jurisdiction to make a declaration of incompatibility (with human rights law) in this case,” the court said in a summary of the decision.

The Northern Ireland Human Rights Commission had argued that the law should be changed to allow abortions in cases where pregnancies were as a result of rape or incest, or in cases where the fetus had a fatal abnormality.

The Commission welcomed the court‘s opinion that the law was incompatible with the European Convention but said it was disappointed in the ruling that it did not have sufficient powers to take the case.

Other campaigners joined the Commission in calling on the British government to act without delay.

“This is a landmark decision that I hope will lead to changes that will improve the lives of women in Northern Ireland and the care they receive. Change on this is needed and needed now,” Breedagh Hughes, Royal College of Midwives Director for Northern Ireland, said in a statement.

A Northern Irish woman gave evidence to the Supreme Court about having to travel abroad for a termination after being told her baby could not survive. Sarah Ewart said she intended to take a case to Belfast’s High Court to seek the declaration of incompatibility the Commission was unable to obtain.

Northern Ireland’s elected assembly has the authority to decide on any changes to its abortion laws. It voted against legislating in cases of fatal fetal abnormality and rape in February 2016 and the assembly has not sat since the devolved government collapsed in January 2017.

Britain‘s Northern Ireland minister has said she would like the law to be changed but that the matter should be decided by local politicians. The two main parties, which have been unable to restore the province’s power-sharing government, are also divided on the issue of abortion.

The main nationalist party, Sinn Fein, backs calls for some change in the law. It said the court‘s dismissal was on a technicality and its judgement made clear that the status quo was untenable when it came to cases of fatal fetal abnormality and rape.

However a lawmaker from the the main Unionist party, which opposes liberalising abortion law and also props up the minority British government in London, said he was “delighted with the decision.”

“Had it gone the wrong way Northern Ireland would have faced abortion on demand,” the Democratic Unionist Party’s Jim Wells told Reuters.

By In Cyprus
Previous article
Police seize €37,487 from Ayia Napa home
Next article
Investigation into arrest of asylum seeker for theft of a ham