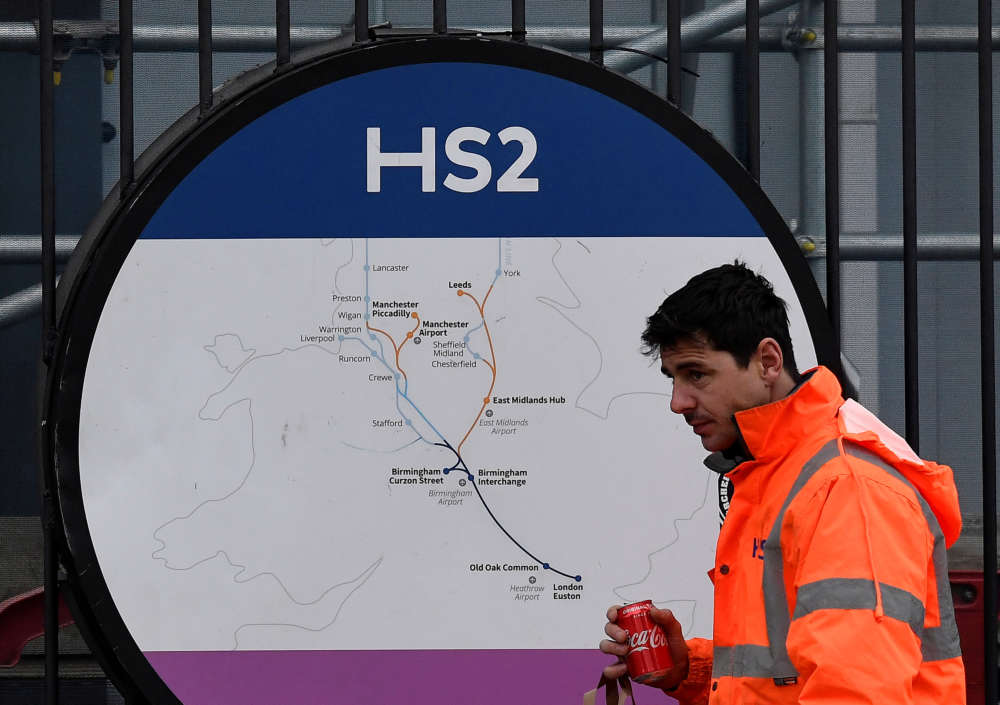 Known as HS2, the scheme will slash journey times and add capacity to Britain’s crowded network, allowing it to catch up with countries such as France and Spain which have long had extensive high-speed rail.

Johnson, who secured a big election victory in December by winning towns across northern England, told lawmakers on Tuesday he would restore discipline to Europe’s largest infrastructure project after its costs spiralled.

“The cabinet has given high speed rail the green signal,” he told Parliament.

“We are going to get this done, and to ensure we do so without further blowouts on either costs or schedule, we are taking decisive action to restore discipline to the programme.”

A review was carried out last year into whether HS2 should still go ahead, after its predicted cost rose to a reported 106 billion pounds ($137 billion), almost double the bill five years ago.

“People in those regions to whom he promised so much in the general election are going to be sorely disappointed when they see what actually happens.”

HS2 is one of the few issues causing unrest in Johnson’s Conservative Party since he won a large majority in parliament.

The line cuts through areas outside London which are home to Conservative voters, putting pressure on lawmakers who represent them. But it is also symbolic of his election promise to spend more money improving infrastructure in the north of England.

“HS2 is unloved, unwanted and has been grossly mismanaged,” Conservative lawmaker Andrew Bridgen said, adding that he feared the project “could well be an albatross around this government and the country’s neck”.

Johnson responded defiantly: “Every great infrastructure project is opposed by the people at this stage.”

He avoided the embarrassment of a widespread party rebellion by promising to overhaul the project’s management, review some elements of its route and simultaneously announce funding for other local transport projects.

Johnson said he was backing HS2 as part of a wider revamp of Britain’s transport infrastructure, including upgrades to buses and cycle lanes, emphasising a plan to build connections between towns and cities in northern England.

Fitting with Johnson’s priority to “level up” the country by investing in transport links outside London, he also promised “an integrated plan for rail in the north”.

He said that a minister would be appointed to oversee the project, and promised to cut its cost.

HS2, which initially won government approval in 2012, will connect London to Birmingham in central England, known as phase one, before splitting into two and heading further north, to Manchester in the west and Leeds to the east.

The government has already spent 7.4 billion pounds on HS2 without laying down any tracks. However, the physical work has started, with buildings demolished, land cleared and utilities rerouted.

Contracts worth around 10 billion pounds have already been handed out for construction work.

Britain’s Balfour Beatty and Mace, Swedish-headquartered Skanska Construction, France-based VINCI Construction and Spain’s Dragados are among the companies involved in the contracts for the tunnels and stations which have so far been awarded.

Opponents of HS2 have said it would be cheaper and faster to spend money on boosting existing services on conventional lines. But backers of HS2 say the existing track, much of which was built in the Victorian era, already full and upgrades, will not deliver enough new capacity.

Environmental campaigners, who have erected protest camps at sites along the route, say the rail link will damage or destroy 108 woodlands in the largest single act of deforestation in Britain since World War One.