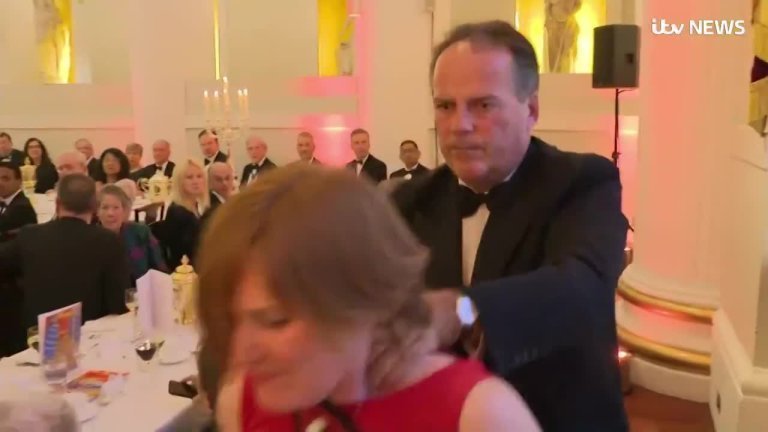 A junior foreign office minister has been suspended pending an investigation after grabbing a female demonstrator by the neck and pushing her when a climate-change protest interrupted a speech by Britain’s finance minister.

Several women prevented Philip Hammond from speaking for a few minutes by using loudspeakers to shout slogans during an annual banquet in London’s landmark Mansion House building on Thursday evening.

Footage posted online by broadcaster ITV showed foreign office minister Mark Field grappling with one of the women and holding her by the back of her neck as he marched her out of the room.

He subsequently apologised but a spokeswoman for Prime Minister Theresa May said on Friday Field had been suspended from his responsibilities whilst an investigation takes place.

“The prime minister has seen the footage and she found it very concerning,” she added.

Field told ITV his response was due to fears over security.

“In the current climate, I felt the need to act decisively to close down the threat to the safety of those present,” he said in a statement.

His office did not respond to a request for comment from Reuters.

The main opposition Labour Party’s spokeswoman for women and equalities Dawn Butler said Field should be immediately suspended or sacked. “This is horrific,” she wrote on Twitter.

Environmental campaign group Greenpeace said it had organised the protest in the heart of the capital’s banking district, accusing the finance industry of funding climate change and the finance ministry of trying to water down government action to mitigate it.

It criticised Field’s response to the demonstrator.

“I don’t see any justification for the kind of violent behaviour that we saw from him last night. It’s an extremely shocking and concerning state of affairs,” said Rebecca Newsom, Head of Politics at Greenpeace UK.

The City of London Corporation is looking again at its procedures after Thursday night’s incident.

“We are investigating last night’s breach of security at Mansion House and will be reviewing arrangements for future events,” said a spokesman.

Video from the Guardian