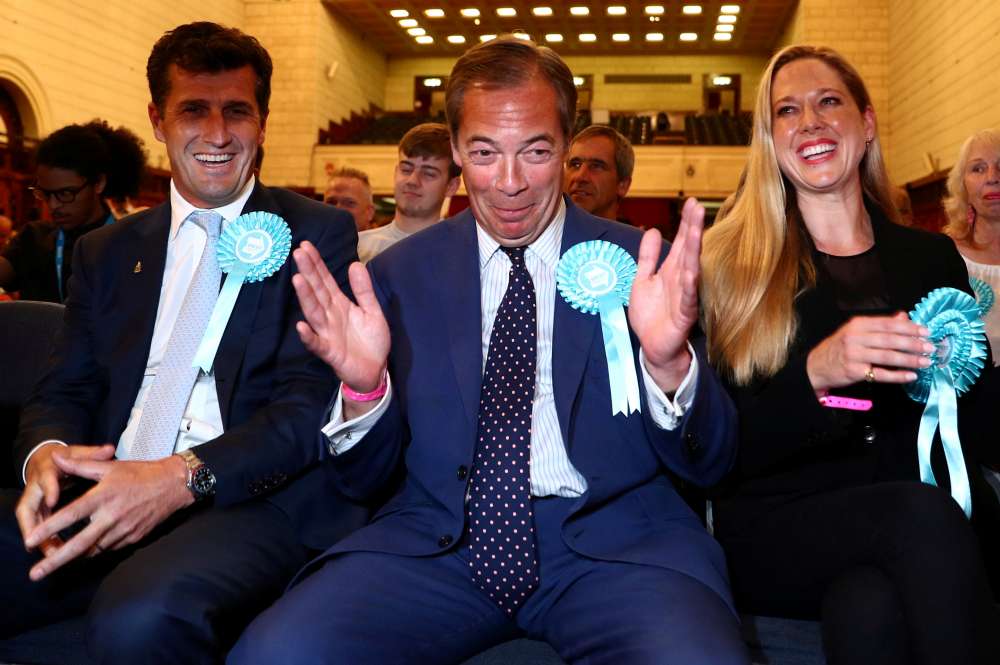 Nigel Farage’s Brexit Party stormed to victory in a European election, riding a wave of anger at the failure of Prime Minister Theresa May to take the United Kingdom out of the European Union.

A European Parliament election that the United Kingdom only took part in because May delayed Brexit showed a country even more polarised over the EU divorce nearly three years since a 2016 referendum in which it voted 52% to 48% to leave.

The United Kingdom was supposed to have left on March 29 but it remains a member of the EU and its politicians are still arguing over how, when or even whether the country will leave the club it joined in 1973.

May on Friday announced she was stepping down, saying it was a matter of deep regret that she could not deliver Brexit. The Conservative Party was on course for one of its worst results in a nationwide election ever.

Across England and Wales, voters turned away in anger from May’s Conservatives and the opposition Labour Party of Jeremy Corbyn, which had sought a softer version of Brexit.

The Brexit Party came first while explicitly pro-EU parties – the Liberal Democrats, Greens and Change UK – were, combined, a few percentage points behind.

Farage, elected as a Member of the European Parliament for the South East of England, said he wanted to be involved in Brexit negotiations and warned that British politics was on the cusp of major upheaval unless Brexit took place on Oct. 31.

“We want to be part of that negotiating team,” Farage said in Southampton, southern England.

“If we don’t leave on Oct. 31 then the score that you have seen for the Brexit Party today will be repeated in a general election and we are getting ready for it.”

Such a severe election drubbing for the two major parties will stiffen a belief among leading Conservatives vying to replace May that they must go for a more decisive split from the EU.

But it will also increase pressure on Labour’s Corbyn to come out explicitly for a second referendum on EU membership.

“This issue will have to go back to the people, whether through a general election or a public vote,” Corbyn said. “Over the coming days we will have conversations across our party and movement, and reflect on these results on both sides of the Brexit divide.”

BBC projections put the Conservatives on around 10 to 12%, down from 23% in 2014. Labour came third in Wales. The Liberal Democrats even won in Corbyn’s home constituency, Islington.

The Brexit Party won around 10 percentage points more than the UK Independence Party did in 2014, partial results showed.

In total, the United Kingdom elects 73 MEPs (Members of the European Parliament) to the 751-seat parliament. They will not contribute directly to British policymaking on domestic issues like Brexit, but will have a say in EU-wide policy as long as they remain in the assembly.

Farage casts Britain’s political system as broken and says parliament and the government are trying to thwart Brexit. He wants the United Kingdom to leave the EU as soon as possible and says the damage of a no-deal departure has been exaggerated.

Farage, who as UKIP leader persuaded May’s predecessor, David Cameron, to call the Brexit referendum and then helped lead the campaign to leave the EU, has said that failure to implement Brexit would show Britain not to be a democracy.

Pro-Europeans fear Brexit will make them poorer, undermine London’s position as a global financial capital and weaken the West as it grapples with Donald Trump’s unpredictable U.S. presidency and growing assertiveness from Russia and China.

The Liberal Democrats, who campaigned under the slogan “Bollocks to Brexit”, oppose Brexit and want a second referendum to stop it.

Supporters of Brexit admit there may be some short-term pain for the UK’s $2.9 trillion economy but long-term it will prosper when cut free from the EU which they cast as a failing German-dominated experiment in European integration.

The loss of Britain for the EU is the biggest blow yet to more than 60 years of efforts to forge European unity after two world wars, though the 27 other members of the bloc have shown surprising unity during the tortuous negotiations.