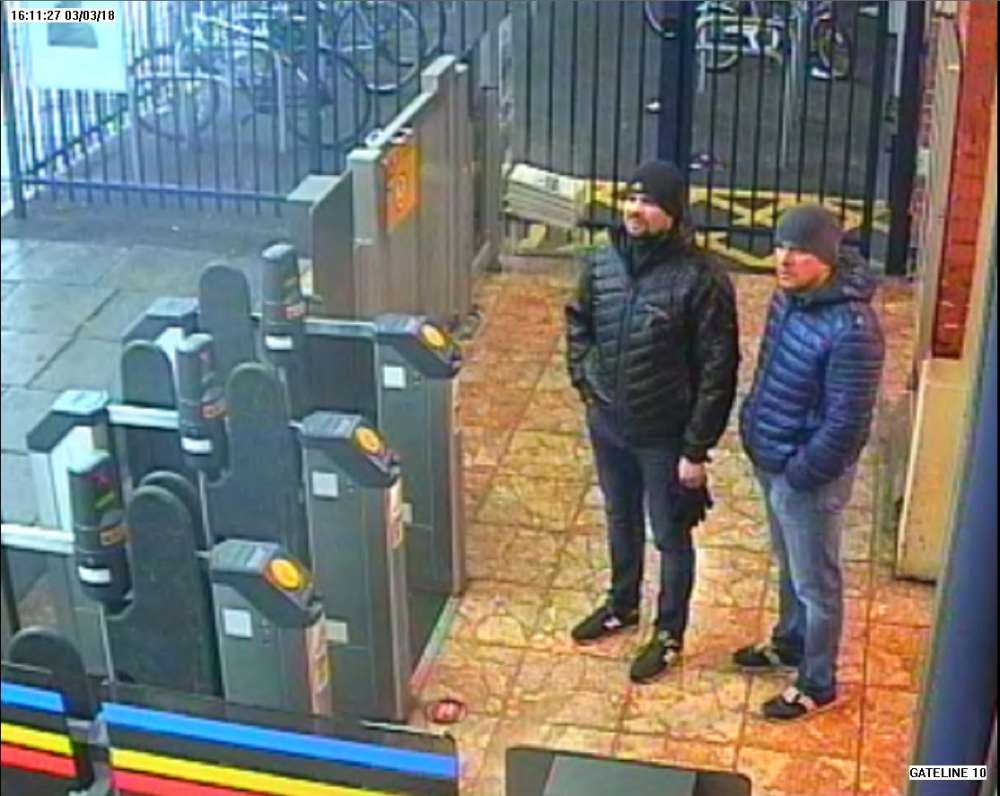 British prosecutors on Wednesday charged two Russians for the attempted murder of a former Russian spy and his daughter with a nerve agent, naming suspects for the first time in a case that has caused one of the biggest East-West rifts in decades.

Sergei Skripal, a former Russian military intelligence officer who betrayed dozens of agents to Britain’s MI6 foreign spy service was found unconscious with his daughter Yulia on a public bench in the English city of Salisbury on March 4.

British police released CCTV images of two Russian men they said flew in to Britain for a weekend to commit murder. Moscow said it had no idea who the men were.

Britain has blamed Russia for the poisonings and identified the poison as Novichok, a nerve agent developed by the Soviet military in the 1970s and 1980s.

Russia has repeatedly denied any involvement in the attack. Britain and dozens of other countries have kicked out Russian diplomats over the incident, and Moscow has responded tit-for-tat in the biggest diplomatic expulsions since the Cold War.

Neil Basu, head of UK Counter Terrorism policing, said the plot was “a remarkably sophisticated attack” which appeared to be a clear assassination attempt.

British prosecutors named the two suspects as Alexander Petrov and Ruslan Boshirov. Police said they arrived in Britain from Moscow on March 2 at London’s Gatwick airport on an Aeroflot flight and left on March 4.

Basu said they were around 40 years old. They travelled under genuine Russian passports although their names are believed to be aliases. It was not their first trip to Britain.

Basu said he stood by Prime Minister Theresa May who said in March there was no other conclusion than that the Russian state was responsible. Police needed the public’s help worldwide in identifying the men and their earlier movements.

“We would like to hear from anyone who knows them,” Basu said.

Russia’s foreign ministry said the names given by Britain did not mean anything to Moscow.

Basu said the two men had been filmed by CCTV cameras near Skripal’s house, where Novichok was sprayed on the front door. Traces of Novichok contamination were found in the London hotel room where the two men had stayed, he said, adding this was not a public health concern.

The Russians are charged with conspiracy to murder Sergei Skripal and the attempted murder of Skripal, his daughter and Nick Bailey, a police officer who was taken ill while attending to the Skripals. They are also charged with use and possession of Novichok, contrary to the Chemical Weapons Act.

A European arrest warrant has been issued for the two Russians, British prosecutors said, but Britain will not ask Moscow to extradite them because Russia’s constitution does not allow its citizens to be extradited.

Basu would not comment on whether the Skripals had faced threats before the attack or where they were currently located. However, he said they were making a good recovery.

A British woman, Dawn Sturgess, died in July after coming across a small bottle containing Novichok in a town near Salisbury where the Skripals were struck down. Her partner, Charlie Rowley, was also stricken but survived.

Basu said they ha no doubt the two events were connected and they were liaising with prosecutors about bringing charges connected to the poisoning of Sturgess and Rowley.

The case has been likened by British politicians to the murder of Russian dissident and former KGB spy Alexander Litvinenko, who was poisoned with a rare radioactive isotope in a London hotel in 2006.

Britain charged two Russians with the murder of Litvinenko but both remain in Russia. One later won a seat in parliament.

By In Cyprus
Previous articleBoat runs aground in Peyia area, no injuries
Next articleUnemployment decreases by 23% in August