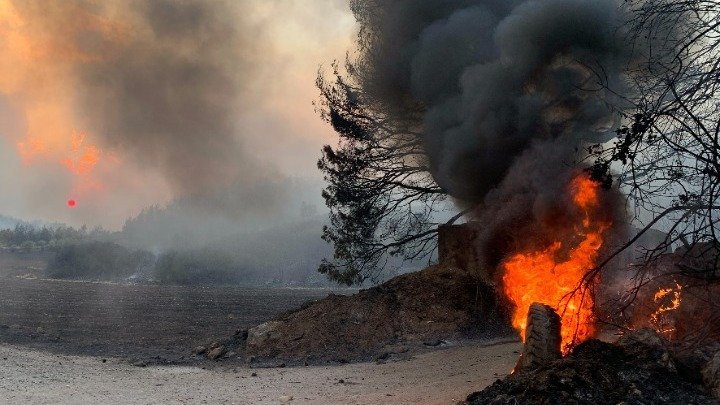 A fire front spanning a 2km area has taken on immense proportions and is fast moving towards the village of Milies, in the northernwestern part of Evia island on Saturday evening.

Another fire front is heading straight to the village of Monokaria, which was evacuated on Friday, and where police is evacuating residents.

On the northeastern side of the island, in the areas of Vassilika and Psaropouli, several fronts are out of control and have overwhelmed all defense lines, including the bold patches created by land forces against the fires’ spread.

Hundreds of Greek firefighters and dozens of firefighters from several countries are operating at Evia against the fires.

An extensive fire front in the area of Achladini in the municipality of Ancient Olympia, northwestern Peloponnese, has rekindled and is fast moving anew towards the area of Lalas, Ilia Region Vice-Governor Vassilis Giannopoulos told Athens-Macedonian News Agency (ANA-MPA) on Saturday evening.

The fire at Achladini has damaged houses, he added, while traffic on the Tripolis-Pirgos national highway has been closed off from Kalliani to the 106 km.

The situation is difficult also in the areas of Doukas and Milies, added the official.

By gavriella
Previous article599 new cases of COVID-19, one death on Saturday
Next article66-year-old in hospital after being severely injured by car