The squalls blowing in from Lake Erie and Lake Ontario had dumped 3 to 5 feet (1-1.5 meters) or more of snow. Authorities said the deaths appeared to be from heart attacks due to overexertion while clearing snow in hard-hit Erie County.

As temperatures plunged, the region’s first major snowstorm of the season materialized on Thursday and intensified overnight into Friday, well before the start of winter on Dec. 21. 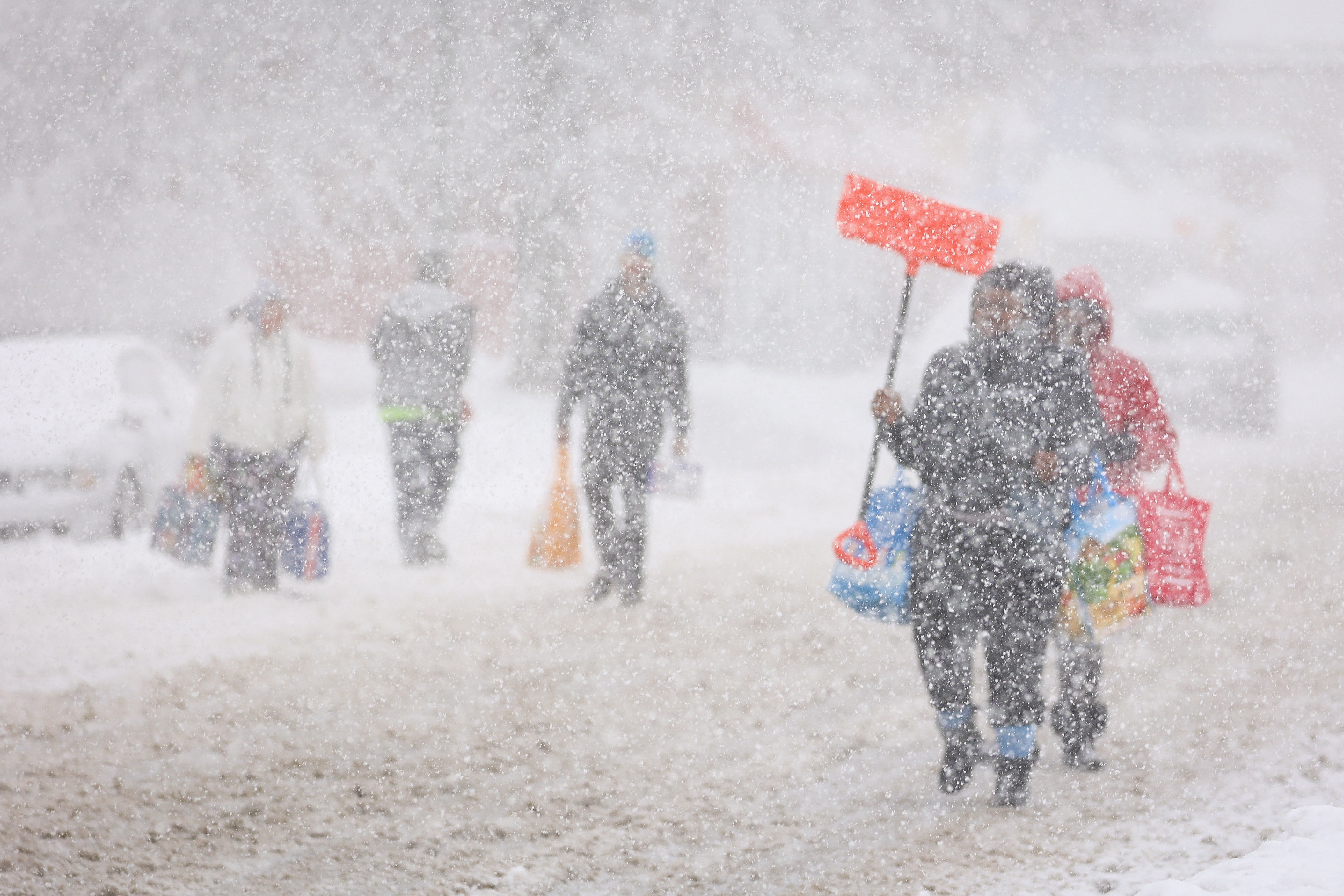 Lake-effect squalls unleashed sporadic bursts of heavy precipitation throughout the day, burying some areas in several feet of snow, and were expected to persist through Sunday, according to the National Weather Service.

By Friday evening, the weather service reported 5 1/2 feet (1.7 meters) of snow measured in the Erie County village of Orchard Park, 15 miles (25 km) south of Buffalo and more directly in the downwind of path of frozen moisture blasting inland off Lake Erie.

Accumulations of 3 to 4 feet and more were recorded at several adjacent locales by late afternoon, while Buffalo, the state’s second-most populous city with some 278,000 residents, awoke to nearly 14 inches (36 cm) Friday morning. 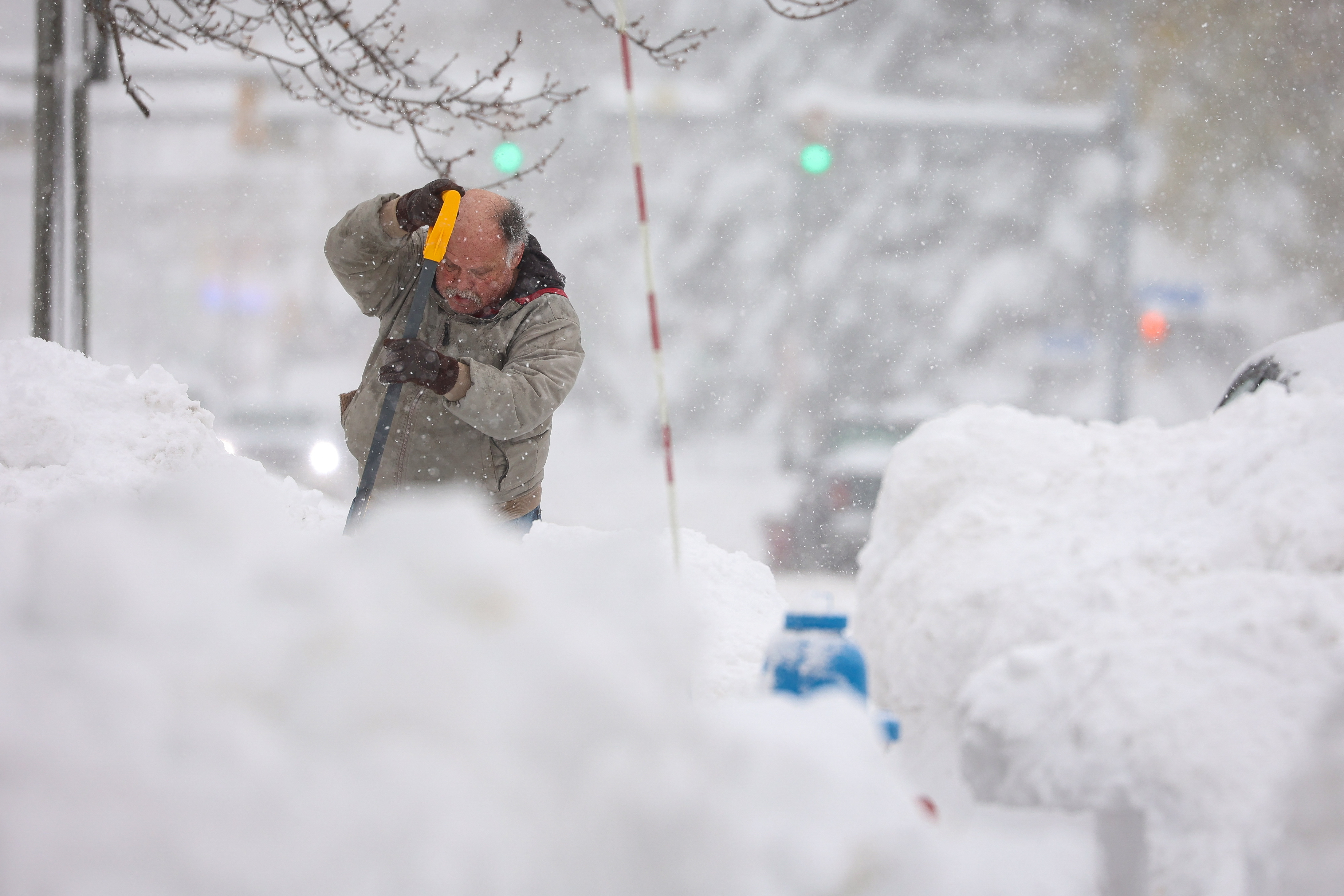 Erie County Executive Mark Poloncarz reported a partial building collapse from the weight of fallen snow in the town of Hamburg, but no further details were immediately available.

As the storm gained momentum, the weather service cited multiple instances in which snow squalls were accompanied by claps of thunder and flashes of lightning, a phenomenon called “thunder snow.” 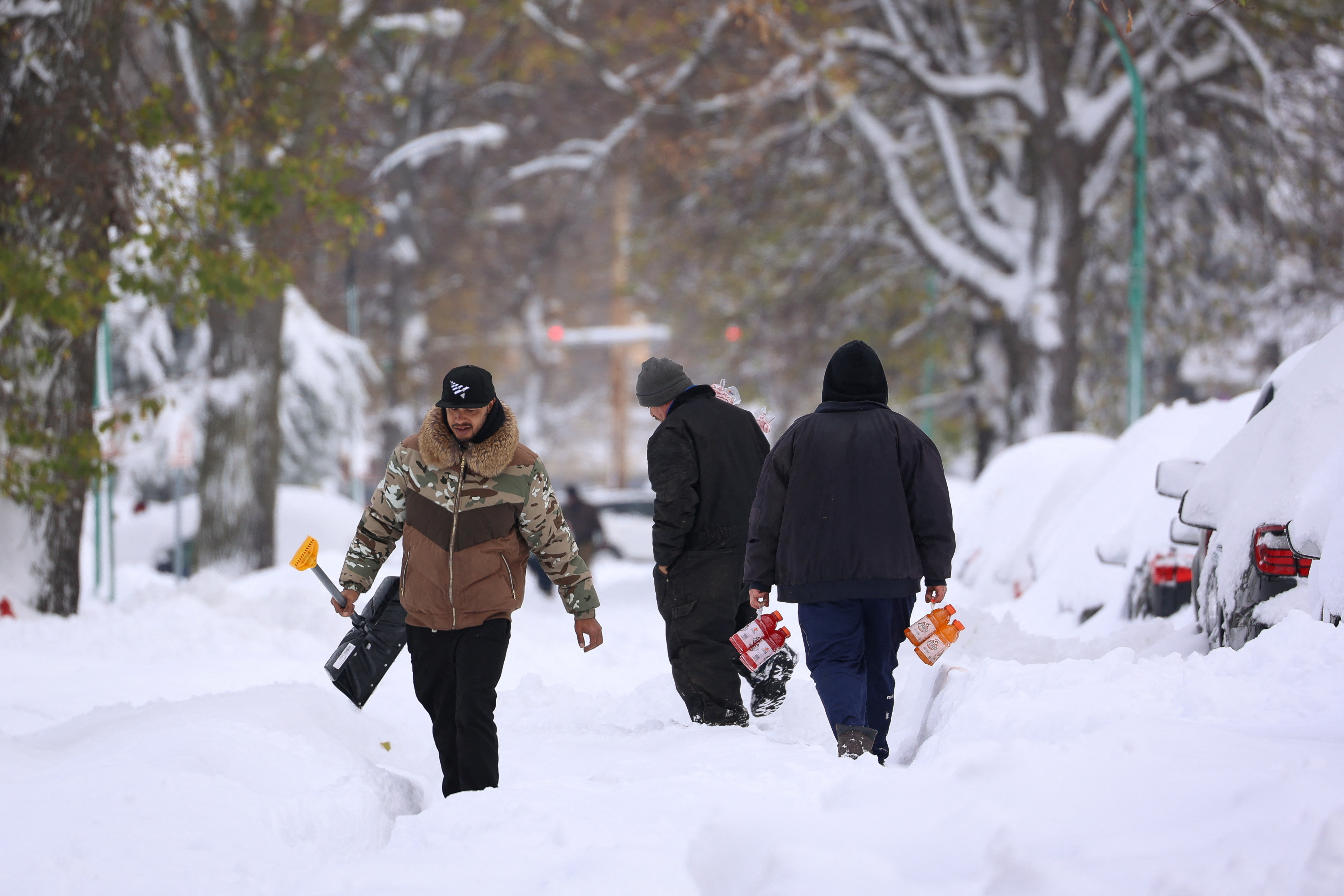 High winds and snow-draped tree limbs and power lines knocked out electricity to thousands of customers, while the storm also forced traffic closures along the New York Thruway and several other major highways.

All but five of nearly 80 flights scheduled to depart from the Buffalo Niagara International Airport on Friday were canceled, said the facility’s aviation director Lee Weitz.

Even so, many western New Yorkers, accustomed to bouts of severe winter weather seemed unfazed.

A Twitter user going by the name of @BuffaloSnowKing posted a video of himself standing outside late on Thursday evening as snow blanketed his yard. “How can you not enjoy this weather?!” he tweeted.

As of early Friday, road-travel bans that had kept motorists off the streets overnight remained in effect for much of the central part of Erie County. Mandatory restrictions were lifted, at least temporarily, in lieu of travel advisories in northern and southern parts of the county, including Buffalo. 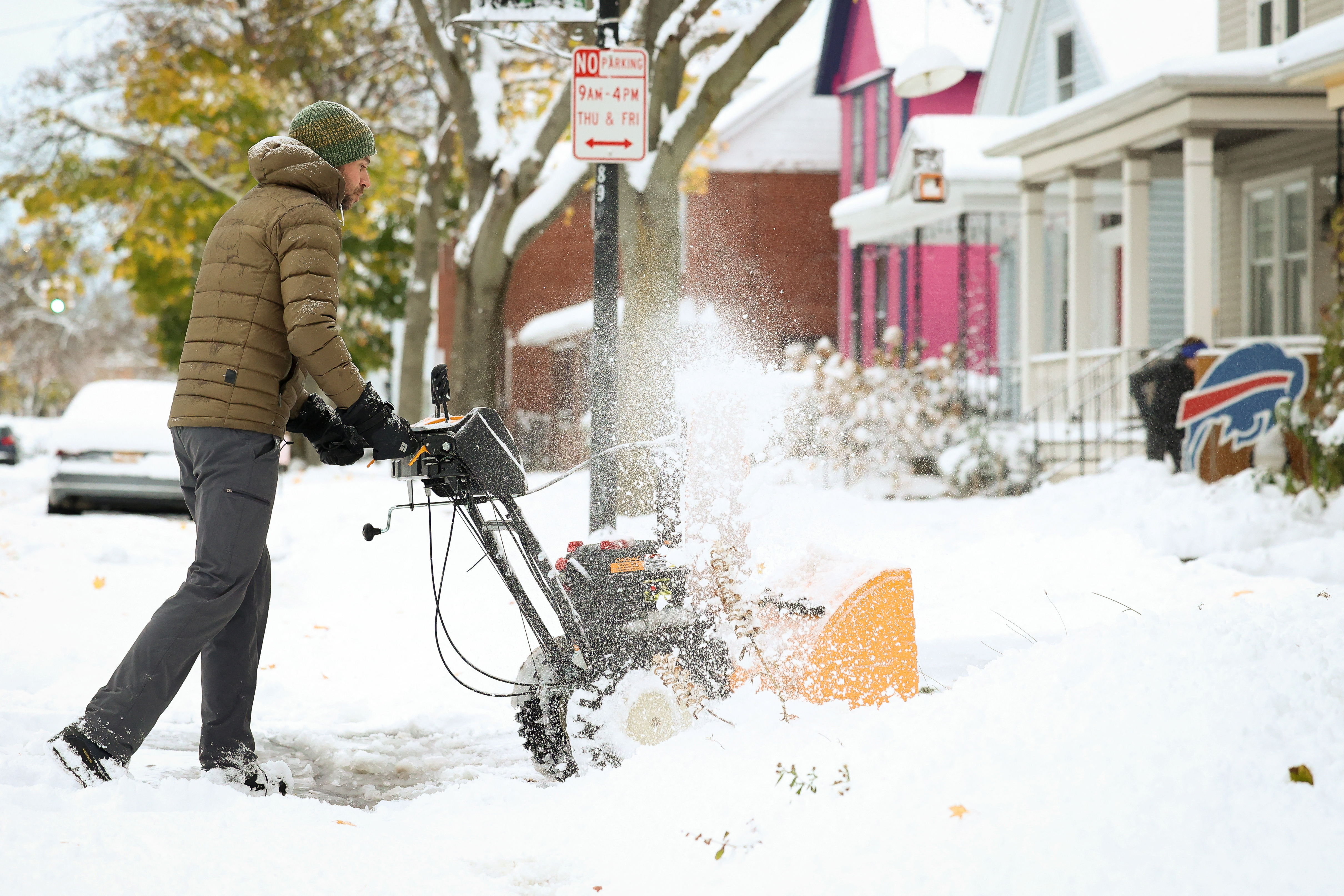 With snow coming down at the rate of 1 to 3 inches an hour, plow crews struggled to keep roads clear, and the strain of snow removal proved too much for some.

“Unfortunately, we must report the passing of two Erie County residents associated with cardiac events related to exertion during shoveling/snow blowing,” Poloncarz tweeted.

Snowfalls of such proportions are not uncommon for western New York in November, when the relatively warm waters of the Great Lakes can mix with frigid air in the upper atmosphere dropping down from the Arctic, according to the weather service. 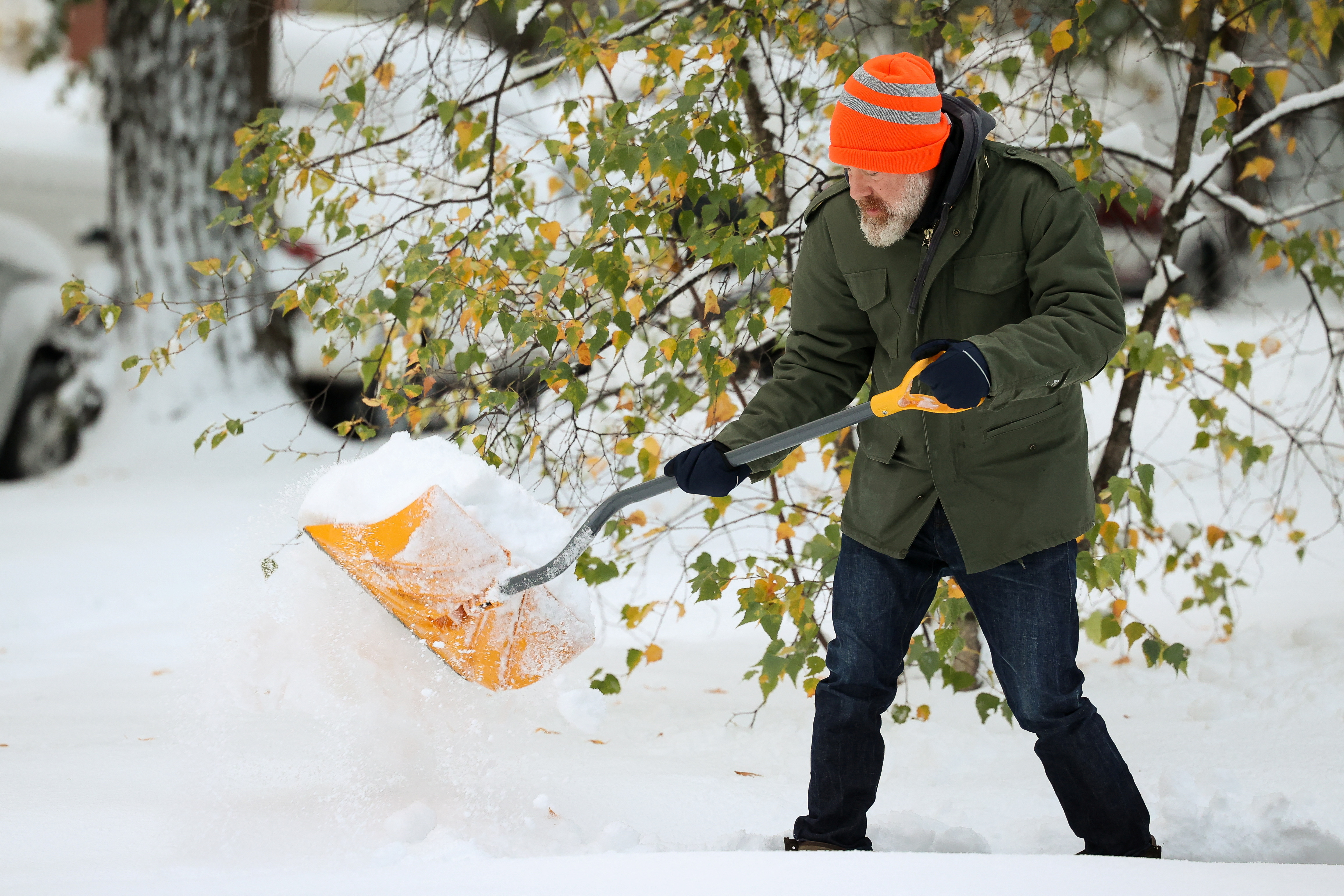 Erie County closed its offices on Friday, though essential staffers were to report to work. The Buffalo Public Schools district, the state’s second-largest serving 32,000 students, canceled all classes and closed offices on Friday.

The prospect of up to 4-1/2 feet of powder on the ground by the close of the weekend prompted the National Football League to move the Buffalo Bills’ Sunday home game against the Cleveland Browns to Detroit.

The storm developed as temperatures for the region, and much of the rest of the northern United States, plunged 10 to 20 degrees Fahrenheit (5-10 degrees Celsius) below average for this time of year, said Rich Otto, a Storm Prediction Center meteorologist in College Park, Maryland.