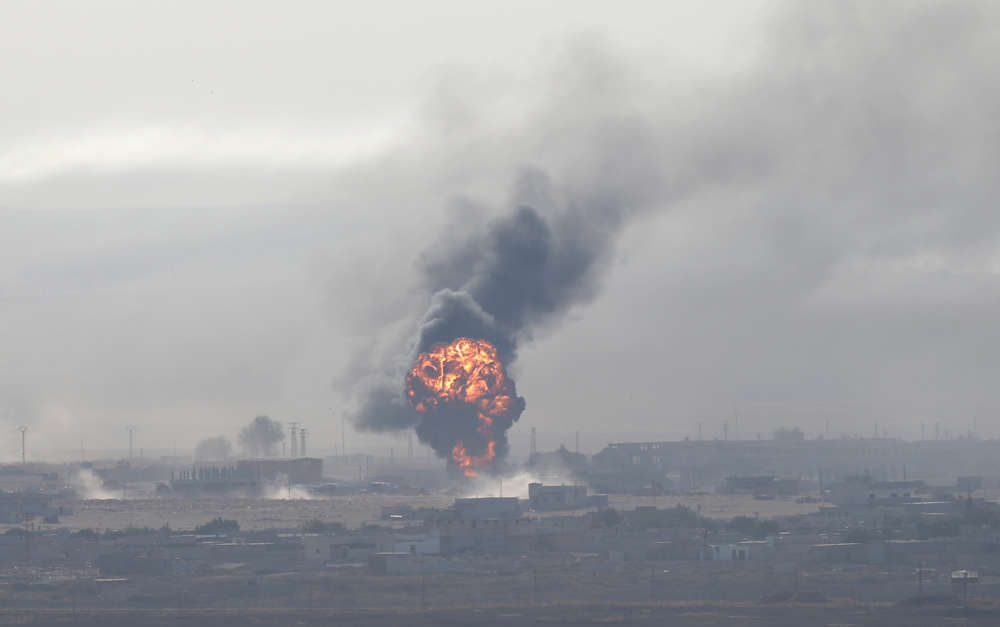 Turkish forces stepped up their bombardment around a town in northeast Syria on Saturday, the fourth day of an offensive against a Kurdish militia, after U.S. troops in the region came under artillery fire from Turkish positions.

The United States has ramped up its efforts to persuade Ankara to halt the incursion against the U.S.-backed Kurdish forces, saying Ankara was causing “great harm” to ties and could face sanctions.

Turkey opened its offensive after U.S. President Donald Trump spoke by phone on Sunday with Turkey’s President Tayyip Erdogan and withdrew U.S. troops who had been fighting alongside Kurdish forces.

On Friday evening, Erdogan dismissed mounting international criticism of the operation and said Turkey “will not stop it, no matter what anyone says”.

The death toll among civilians in Syria had climbed to 20 after two people died in the city of Qamishli, he said. Most of the civilian deaths were also in Tel Abyad, a border town that is one of the focal points of the operation.

On the frontlines, thick plumes of smoke rose around Syria’s Ras al Ain, one of two border towns targeted in the offensive, as Turkish artillery targeted the area on Saturday, said a Reuters reporter across the frontier in the Turkish town of Ceylanpinar.

Intense gunfire also resounded from within the town of Ras al Ain itself, while warplanes could be heard flying overhead, he said.

It was quieter at Tel Abyad, the operation’s other main target some 120 km (75 miles) to the west, with only occasional shell fire heard in the area, another Reuters reporter said.

Earlier, the Pentagon said none of its soldiers were wounded in the Turkish artillery fire near Syria’s Kobani, some 60 km (37 miles) west of the main area of conflict.

Turkey’s Defence Ministry said its forces did not open fire at the U.S. base and took all precautions to prevent any harm to it while it was responding to fire from a nearby area by the Kurdish YPG militia, which Ankara regards as a terrorist group.

A war monitor gave a death toll of more than 100 from the first days of the assault. The United Nations said 100,000 people had fled their homes.

On Saturday morning, Turkey’s Defence Ministry said that 415 YPG militants had been “neutralised” since the operation began, a term that commonly means killed.

The Syrian Democratic Forces (SDF), with the Kurdish YPG as its main fighting element, now holds most of the territory that once made up Islamic State’s “caliphate” in Syria, and has been keeping thousands of fighters from the jihadist group in jail and tens of thousands of their family members in camps.

The Kurdish militia say the Turkish assault could allow the jihadist group to re-emerge as some of its followers were escaping from prisons.

In its first big attack since the assault began on Tuesday, Islamic State claimed responsibility for a deadly car bomb in Qamishli, the largest city in the Kurdish-held area, even as the city came under Turkish shelling.

Five Islamic State fighters fled a jail there, and foreign women from the group being held in a camp torched tents and attacked guards with sticks and stones, the SDF said.

U.S. lawmakers introduced more legislation on Friday seeking stiff sanctions on Turkey over the offensive, underscoring unhappiness from both Democrats and President Trump’s fellow Republicans in Congress over his Syria policy.

U.S. military officials denied lawmakers’ accusations that the Trump administration had abandoned U.S. allies to a Turkish military onslaught. Ankara says it aims to defeat the YPG, which it sees as an enemy for its links to militants who have fought a decades-old insurgency in Turkey.

U.S. Treasury Secretary Steven Mnuchin said Trump had authorized the drafting of “very significant” new sanctions against Turkey, a NATO ally. Washington was not activating the curbs now but would do so if necessary, Mnuchin said.

Turkey aims to set up a “safe zone” inside Syria, where it can resettle many of the 3.6 million refugees it has been hosting. Erdogan threatened to send refugees to Europe if the European Union did not back his assault, prompting a furious response from the EU.